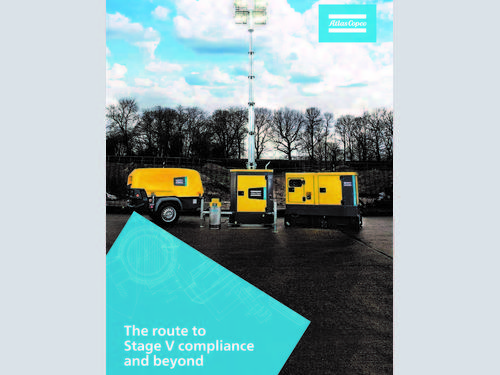 Atlas Copco Power Technique has published a free e-guide that explains the impact of new European Commission emissions standards legislation on non-road machinery such as compressors, generators, pumps and light-towers.

‘The route to Stage V compliance and beyond’ outlines the scope of the Stage V standards, which are being implemented in 2019-2020 as a means of reducing air pollution. The standards enforce stricter limits on emissions of particulate matter (PM), along with newly proposed particle number (PN) limits, forcing manufacturers to equip some non-road engines in certain power categories with equipment such as diesel particulate filters.

The Atlas Copco e-guide provides customers with a clear roadmap to Stage V compliance, while explaining how the new standards will lead to a range of cleaner and better performing products that will be quieter, smaller, and more fuel efficient than ever before.

“While some industrial suppliers have struggled to come to terms with the impact of new engine architectures on the products they offer, Atlas Copco has long since recognised that the introduction of Stage V presents real scope for technological advancement,” said Andrew Walker, President of Atlas Copco’s Power Technique Business Area. “Atlas Copco can provide customers with a clear pathway to compliancy, offering an unrivalled range of next-generation compressors, generators, pumps and light-towers that will offer better performance and value than ever before.”

The European Commission’s desire to improve air quality, and therefore protect the health of European Union citizens, will see a continuation of efforts to reduce emissions from non-road mobile machinery, even after the introduction of the Stage V regulations. The e-guide, therefore, also takes a look at the noticeable trend towards non-polluting and connected air, power and flow solutions that are reliant on alternative power architectures such as hybrid, electric and battery power.

“This trend to alternative architectures is particularly pertinent in urban applications, with a growing number of local authorities in Europe clamping down on the use of diesel equipment in metropolitan areas through the introduction of low emissions zones,” said Walker. He continued: “While the speed and magnitude of this conversion is geographically determined, there can be little doubt that society’s perception of diesel particulates in connection with health-related issues will continue to grow. That’s why the e-guide takes a look at the transition to alternative drive technologies such as battery and electric driven equipment.”