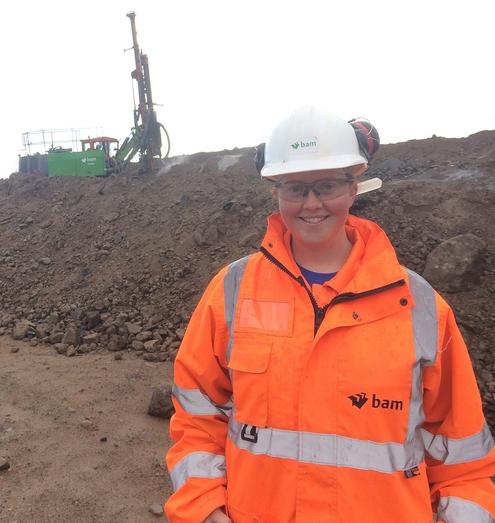 BAM Ritchies’ Charlene Geddes has become the first female in the UK to gain the MPQC Level 3 NVQ Diploma in Shotfiring.

The geography and geo-science graduate from the University of Aberdeen achieved her NVQ qualification last month and has already managed three successful quarry blasts for Bam Ritchies, the geotechnical division of leading civil engineers BAM Nuttall.

Blasting operations are potentially one of the most hazardous roles within a quarry, as recognised by the Quarry Regulations 1999, and before blasting Charlene carries out a manual and laser survey of the area. Using state of the art profiling equipment and software, she collates the survey and drilling information to place explosives within the borehole, ensuring the blast is safe to fire. The correct choice in explosives and initiation system is essential to the success of the process.

“I’ve always been a very outdoor sort of person and practical. I don’t like sitting behind desks,” says Charlene. “I hadn’t thought about quarrying as a career but a friend from university encouraged me to go to an insight day and I thought it looked really interesting.

“I started as a trainee shotfirer and surveyor and I am now qualified in both. I’ve been told that I’m the only female in the country to have achieved this qualification. It’s a really interesting job but one in which you have to prepare in great detail to ensure that the blast is successful and safe.”

In her role, Charlene fires blasts in quarries primarily for aggregates but also for ornamental stone, the latter needing a different amount of explosives and a change in the charge sequence. The largest amount of aggregate she has blasted in a single blast so far is 80,000 tonnes.

“It’s fantastic that Charlene has obtained her shotfiring NVQ,” says Ian Healey, Deputy Contract Manager at BAM Ritchies. “She has worked hard for this and it is phenomenal achievement in such a short period of time. She is already working hard towards her Blast Design and Explosives Supervisor qualifications”

Twenty-seven year old Charlene, who lives in Aberdeen, covers the whole of Scotland in her work for BAM Ritchies. In her spare time she is a signaller in the Army Reserves.