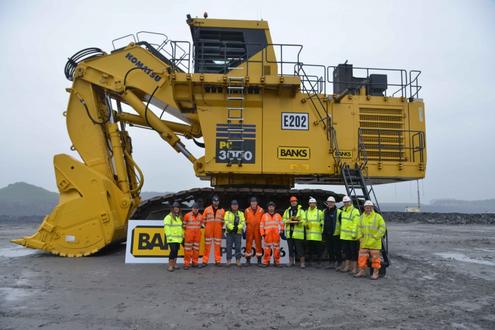 North East employer Banks Mining has further deepened its relationship with Komatsu through a new six-figure plant investment at its Shotton surface mine in Northumberland.

Family-owned Banks Mining has taken delivery of its first Komatsu PC3000-6 mining shovel, which is being used as part of the earth-moving fleet deployed to remove overburden to expose the coal at the Shotton site and will also be used for the site’s restoration.

The 265-tonne face shovel has been supplied by Komatsu Germany (KMG) and reflects Banks Mining’s commitment to investing in the equipment and resources that its skilled teams require to operate their sites safely, responsibly and efficiently.

It's the latest investment by Banks Mining in Komatsu machinery and sits alongside a large number of Komatsu rigid haul trucks that already operate at Shotton.

The V12 engine is housed in a well-designed compartment that allows unrestricted access to all components thanks to the well-designed non-slip walkways. A major benefit is the ability for maintenance teams to be able to stand up around the components, something that is not always possible on other large excavators. All fluid filling points are located in a drop down Wiggins service arm located under the rear of the machine and allow for the quick and safe filling and emptying of fluids. The operators of the PC3000 will benefit from a comfortable working environment thanks to the modern and ergonomically designed cab being mounted on viscous pads. Equipped with the KOMTRAX Plus monitoring system, the machine’s working parameters can be monitored remotely ensuring that any issues can be seen and dealt with immediately.

The purchase of the machine meant a 350 mile relocation from its previous owner’s operation at Hinkley Point to the Shotton surface mine near Cramlington. Using the skills of KMG’s own team of highly qualified fitters and managed entirely by KMG Warrington, the shovel was broken down into nine loads which were transported to the Shotton site where Banks mining had prepared a suitable pad on which to rebuild their new purchase.

Aided by 120 and 200 tonne capacity cranes, the shovel was rebuilt over seven days by the team of three fitters skilfully working on the excavator and bringing it back to life. As part of the deal with Banks Mining, KMG undertook the replacement of various wear parts on the machine including a new PTO gearbox and new injectors for the engine. An upgraded access system was installed along with supplying a new, heavy- duty 16m3 bucket. Various hoses were replaced on the 2012 machine before it underwent a full service and planned maintenance clinic. The PC3000 will be looked after by KMG with a dedicated fitter being stationed on site along with a stock of service items to ensure that the machine availability key performance indicators are met.

Borrowing on the incredible longevity and reliability of the machine’s predecessors, some of which are still working on a daily basis having clocked up over 50,000 hours, the new shovel joins a fleet of equipment in the Banks Mining fleet tasked with removing the remaining overburden at Shotton before commencing the ongoing restoration of the site over the next four years.

Banks Mining has been working in south east Northumberland for well over three decades, and contributes around £35m to the regional economy every year from the Shotton and Brenkley Lane sites through wages, investments and the local supply chain.

It was the first mining company anywhere in Europe to successfully complete the comprehensive assessment for the global Bettercoal initiative, and its operations at Shotton were awarded PRIME (Professional Recognition In Mineral Extraction) certification by The Institute of Quarrying earlier this year in recognition of the comprehensive provisions it makes for staff training, leadership and engagement.

Robbie Bentham, plant director at Banks Mining, says: "Enhancing our plant fleet with the required equipment is essential for helping our teams working our surface mining sites in the safest, most responsible and most efficient, low emission, way possible, and this is the latest investment that we've made in recognition of the skills and expertise that they bring to the job.

"We have a good relationship with the Komatsu team, and the reliability and quality of the product made it the right choice for this task."