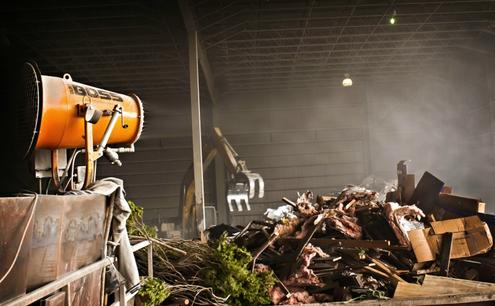 A global innovator in dust suppression technology has helped one of the largest construction and demolition (C&D) recyclers in Illinois significantly reduce fugitive dust at three of its Chicagoland locations. Recent increases in the volume of incoming C&D material forced Lakeshore Recycling Systems (LRS) to manage a greater amount of dust throughout its facilities, potentially affecting air quality and worker safety. By replacing a large sprinkler system for dust control with a DustBoss® DB-30, LRS has successfully used atomized mist to suppress airborne dust, while reducing water usage at the same time. The result is a cleaner and safer workplace, with less pooling and runoff.

“Although we have residential pickup, our main source of material is from C&D projects,” explained Mark Sredin, longtime Production Manager for LRS. “We receive concrete, wood, drywall, cardboard, glass, and paper. All of these materials create their own particulates, along with the years of dust they may have collected prior to demolition.”

Dusty Process
The City of Chicago, in partnership with LRS, has concentrated on recycling programs involving C&D materials by offering incentives to businesses that reduce service charges in return for keeping materials out of landfills. According to Chicago officials, C&D debris accounts for 30% of all solid waste produced in the Chicagoland area. Using the incentives, the city’s plan was to increase the volume of recycled C&D debris above that of residential materials. It now accounts for 85% of all recycled material, with approximately 500,000 tons processed each year. A large percentage of that is managed by LRS, making the company Chicago’s leading recycling and waste diversion services provider.

LRS offers large steel disposal containers to demolition sites. Once full, the company picks them up, covers them with a tarp to contain dust during transport and hauls them to one of the three locations. The recycling process begins when a front loader pushes the material into a 25,000 square foot, three-walled, open-air structure. The debris is loaded onto a tipping floor set on a 7-degree slope leading to a large steel screen with 2-inch openings, which is shaken by industrial vibrators to remove small debris. The remaining larger recyclables are then conveyed to a sorting line, where workers separate material by hand into bins to be sold to various vendors for repurposing.

Prior to adopting atomized mist, the recycler utilized an industrial sprinkler to saturate material, but as volumes increased, operators found the method used excessive water and did not deliver control of airborne particulates. “It saturated the material and caused pooling water under the sprayer and around heavy machinery,” Sredin recalled. “It not only made the material hard to handle, it didn’t adequately address the dust issue.”

After a detailed search in trade magazines and online for a better solution, Sredin’s team investigated the atomized misting equipment from Dust Control Technology (Peoria, IL). Impressed by what they learned, the firm purchased its first DB-30 for the California Avenue location in Chicago, with the intention of replacing the ineffective sprinkler system. “We initially tried it in multiple positions and areas in the plant,” he continued. “Due to its long range, we found that mounting the DustBoss on the deck over the main conveyor and away from the picking line was the best way to suppress dust before it reached employees, letting the mist cover the rest of the conveyor system.”

Fed by a standard hose from a municipal water source, the unit injects water at 100 PSI (6.89 BAR) through a brass manifold equipped with atomizing nozzles. Millions of tiny droplets between 50 and 200 microns in diameter are introduced into the area, propelled by a 7.5 HP fan delivering 9,200 CFM (260.50 CMM). Droplets travel with the dust, colliding with airborne particles and pulling them to the ground. The unit’s 100-foot-long cone of mist has an adjustable throw angle of up to 50°, and when equipped with optional 359° oscillation, it has a coverage area of up to 31,000 square feet (2,880 square meters).

“The moment we turned it on, we noticed a difference in air quality,” Sredin said. “The mist took the particles right out of the air.” While large sprinklers can apply 500 gallons per minute (GPM) or more, the DB-30 uses just 3 GPM. “Even running the atomizer all day long, there is no pooling,” he added. “And our water bill has gone down considerably.”

Outcome and Expansion
After more than a year in service, the units have virtually eliminated visible dust, drastically reducing inhalable particles and keeping work areas free of excess water. A company spokesman said LRS will meet increased production expectations as the construction market continues its rebound, predicting that it will stay on pace for its expansion with gradually increasing volumes of recyclable waste.

According to Sredin, with each new facility, there is anticipation of dust suppression using a DustBoss product. “They’ve done a great job and exceeded all of our expectations,” he concluded.