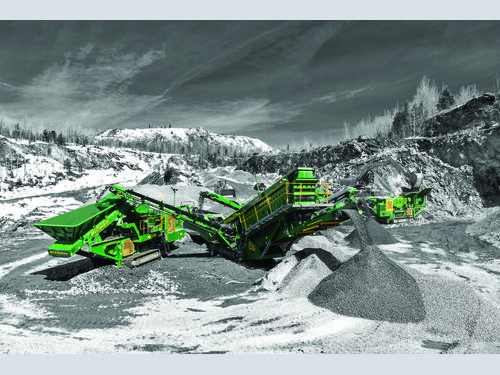 Proud to be the largest independent manufacturer of mobile crushing and screening equipment in the world, the last 10 years has seen year on year growth for McCloskey with over 100 machines sold annually in the South of England alone.

McCloskey are targeting rapid growth within the market and aim to even better impact and serve their customers.

The best testimonial for the McCloskey brand is that from their existing customers themselves.

Cowdenbeath based Collier Group recently took delivery of a new McCloskey J50 Jaw Crusher for their Goathill Quarry. Renowned for having one of the hardest Granite stone quarries in the country (average PSV value of 68), following extensive trials of all the brand leading machinery, the McCloskey J50 Jaw proved to effortlessly achieve production rates of over 320 tons per hour, easily surpassing the capacities of their existing equipment.

Duncan Collier, Founder and MD of Collier Group commented, “I must be honest and say I had never really considered McCloskey products previously even though I had heard good reports. Historically I have simply placed repeat business with our previous supplier. We had a J50 Jaw Crusher on trial and even before it was taken off the low loader the build quality shone through.”

He added, “I really didn’t expect the J50 to perform to the levels it did, as I had trialled various machines from different manufacturers that had struggled to deal with our seriously tough granite. I obviously listen to my machine operators when purchasing new equipment and we were all over the moon with not only the production rates, but the build quality and simplicity of the controls and also with the professionalism of McCloskey. I’ve been so impressed that I have also ordered the R155 Screener.”

Another happy McCloskey customer is Airdrie based JCH Plant Hire. The firm recently took delivery of a new McCloskey J45v2 Jaw Crusher which is one of two new machines ordered for their Contract Crushing Operation.

James Currie, owner of JCH stated, “We ended up trying a J45 in our crushing yard and were impressed to say the least, not only did the machine stand out as being of way better build quality to our existing machine, but it totally out performed as well”. James went on to add, “we had obviously heard of the McCloskey products previously but had limited knowledge. Having seen one in action, we had no hesitation in ordering 2 new machines to keep up with our ever-increasing work load”.

Another advocate for the McCloskey products is McCloskey’s new Scotland territory manager. Chris commented, “I have served the crushing and screening industry for many years representing the competition, but McCloskey have proved to be a breath of fresh air. As often recognised by our customers, the products are built extremely well. Not only does the quality speak for itself, McCloskey have a strong focus on customer satisfaction, after market and customer support come first. Not only do we have a superior product in terms of build quality but the production rates and cost per tonne are often unrivalled.”

With a number of other McCloskey machines working throughout the country, the team are excited to continue their growth and are looking forward to continuing to exceed customer expectations with reliable, durable and high performing products including Crushers, Screeners, Trommels and Stackers.