Demolition of the year man on our winning team 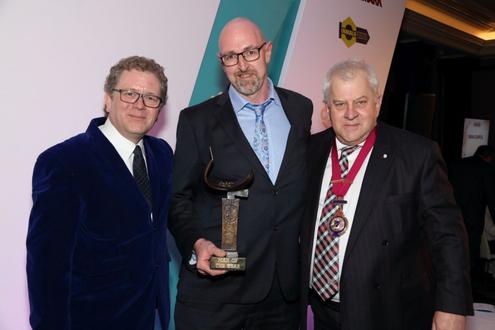 Worsley Plant are delighted that their very own Brian Carroll received the 2018 Demolition Man of the Year Award at Friday’s AGM and Awards Luncheon held by the National Federation of Demolition Contractors (NFDC) at the Rosewood Hotel in Holborn, London.

The NFDC stated why Brian was so deserving of the title: “Brian has given so much to the Federation, working tirelessly for Demo Expo 2017 to the benefit of both ISPs and Corporate Members. Brian was involved in all stages of the planning, set up and running of Demo Expo to ensure the event was the success it was. The NFDC wished to acknowledge and celebrate this success by honouring Brian with Demolition Man of the Year Award.”

The most powerful voice in the demolition industry, the NFDC has championed the standards and professionalism of its members for more than 75 years. That’s why, at Worsley Plant, we haven’t looked on this Award lightly. MD, Sean Heron adds: “For one of our team members to win such a prestigious award is fantastic. Brian fully deserves this great achievement. His knowledge of the industry is a great benefit for the company as it is one of the key industries in which we operate.”

Brian Carroll joined the company in September 2015 as General Manager Southern, setting up a new facility to feed London and the south of England, and has been responsible for running the facility and generating sales in this area.