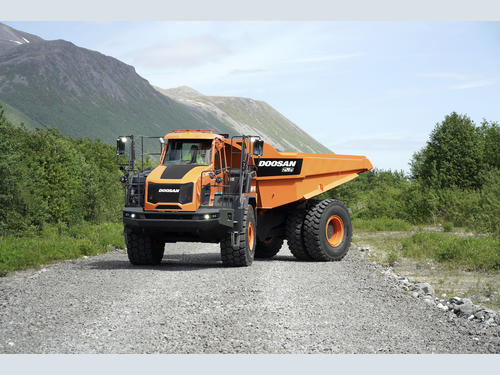 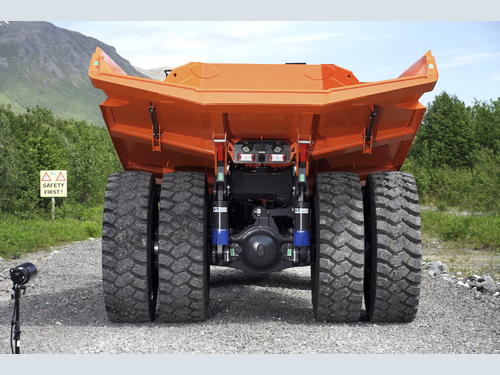 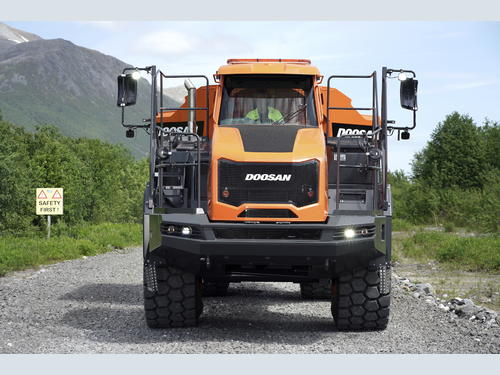 One of several world premieres from Doosan at Bauma 2022 is the launch of the company’s new 4x4 articulated dump truck (ADT). Complementing the company’s standard, market-leading range of 6x6 ADT models, the new 4x4 version of the DA45-7 ADT is intended to compete with rigid dump trucks (RDTs) in the 40-tonne class.

The new 4x4 DA45-7 ADT complements the current market-leading range of Stage V compliant 6x6 ADTs from Doosan, which includes the DA30-7 and DA45-7 models with payloads of 28 and 41 tonne, respectively.

In the new 4x4 ADT, the front truck and cab unit is the same as in the original 6x6 model, with modifications being made on the rear dumper unit only. Featuring a ZF EP8-420 transmission, the 4x4 DA45-7 is a two-axle ADT with twin wheels at the rear, and with a dumper section similar to that on RDTs in the 40-tonne class.

“With superior operation on poorer roads, smoother surfaces and steeper terrain, the aim of our new 4x4 machine is to challenge RDTs in the 40-tonne class, by providing a dumper product that delivers much more than RDTs,” says Beka Nemstsveridze, ADT Product Manager at Doosan.

As well as performing better in conditions that are tough for RDTs, the new 4x4 DA45-7 ADT has a width of less than 4 m to avoid the need for special transportation and offers a better turning radius than a comparable RDT. The shorter turning radius and the design of the rear dumper unit, which is more suited to carrying flat and heavy rocks, provide particular advantages in the mining and tunnelling industries.

The latter are growing markets for ADTs, and include pioneering, short-term mining projects, quarrying and contract mining industries, especially those in southern Africa, the UK and Australia. Construction and bulk earthmoving contractors involved in roads, dams, airports, landfills and development projects are also large users of ADTs. Together these areas make the ADT market a wide and varied one, thereby ensuring a large customer base.

“The development of our 4x4 ADT was inspired by customer demand and the new 4x4 ADT can meet the needs of markets around the world by offering a compelling advantage to customers with specific requirements. For example, a machine like this might be able to extend the season for a mine that normally has to be stopped for a certain period due to the rainy season,” says Beka Nemstsveridze.

The new 4x4 DA45-7 ADT has been developed at the Doosan ADT plant located in Elnesvågen, near Molde in Norway. As well as the advantages detailed above, the new Doosan Stage V 4x4 ADT provides excellent load carrying performance, fuel efficiency, enhanced controllability and high operator comfort, together with improved reliability, durability and reduced maintenance and servicing costs.