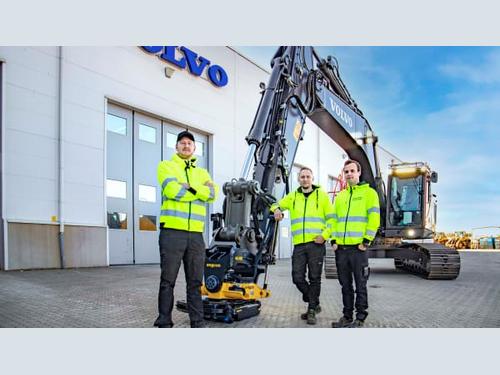 At the beginning of 2021, Volvo CE announced that they had developed the Volvo Smart Connect solution. A new factory option that connects tiltrotators from different manufacturers directly to the machine, integrated with Volvo's machine steering system, Volvo Dig Assist. Simultaneously, Engcon announced that they have adapted their own control system DC2 for this new possibility with the engcon Machine Link (eML) option. It will be a type of plug & play solution for Engcon's tiltrotator and the DC2 control system. The first of Volvo's models to receive this are the updated EC250E and EC300E.

The Swedish Volvo dealer Swecon has already mounted a tiltrotator to the world's first Smart Connect machine, an EC250 E ordered by the Swedish contractor Tingsholmens Entreprenad. The excavator was equipped with Engcon's safe and automatic quick hitch system, and an EC226 tiltrotator with EC-Oil.

“We have five excavators in the company, of which four are fitted with Engcon, the fifth machine is equipped with another tiltrotator brand which we will now replace with the new EC250 with Engcon”, says Elias Svensson, co-owner of Tingsholmens Entreprenad.
Elias says that he and the company's co-owner John Svensson, have only ever had good experiences with Engcon and thus the choice was easy when choosing a tiltrotator for the new 250.

“I believe that Engcon is the tiltrotators' Rolls Royce considering how reliable they are. We have tried other brands, but it has not worked out so well, therefore we will replace the machine that does not have Engcon”.

Tingsholmen Entreprenad’s new EC250E was equipped at Swecon's workshop in Sweden in Jönköping, Elias Svensson was on site ready to receive the completed machine.

“The machine is really nice looking”, says Elias when he looked at the finished result. A shiny new Volvo EC250E fully equipped with Engcon´s automatic quick hitch, a tiltrotator, the machine control from Leica Geosystems, central lubrication, etc.
A big job awaits the team in Habo, Sweden where the new 250 will be used for terracing and water and sewerage work.

“It is always fun with a new machine and this time it will be extra fun to put the bucket in the ground”, says Elias Svensson.