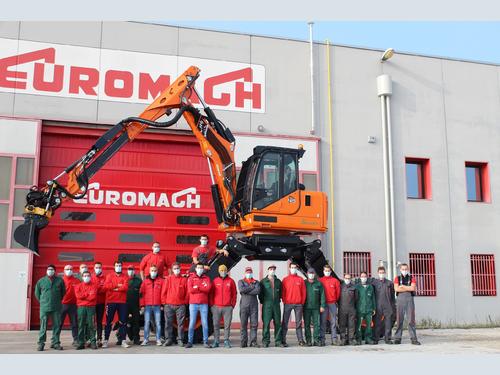 With its 17 tons and a raw power engine of 255 horsepower, the Euromach R145 can call itself the world's largest spider excavator. Able to perform all conceivable functions from one and the same position whilst climbing steep terrain. And to help improve efficiency, it has now been equipped with an Engcon tiltrotator.

”It is fantastic fun that we get to deliver our tiltrotator to the world's largest spider excavator”, says Peter Högberg, from Sales at Engcon International.

The Italian firm Euromach manufactures spider excavators in sizes ranging from 1.5 tons up to 17 tons. They are specially built to be able to climb and function on steep terrain where conventional wheel and crawler excavators could not reach. The collaboration with Euromach has taken place via Engcon's Italian dealer Spektra.

”Antonio Stucci of Spektra’s sales team and I have together specified an EC219 tiltrotator that fits the machine perfectly”, Peter Högberg continues.

A flexible climber with many smart features
The Euromach R145, also called the Big Foot, has four hydraulic and wheeled "legs" that can be pulled in and extended independently of each other both in width and length. This gives a working width from 2430 - 4740 mm and the length can vary from 5900 - 6700 mm. This makes Big Foot an agile climber and despite its weight, can be applied in ways few other vehicles could match.

”Euromach believe that with our tiltrotator, the driver can perform all conceivable functions from one and the same position, which makes the world's largest spider excavator even more efficient and flexible”, says Peter Högberg.