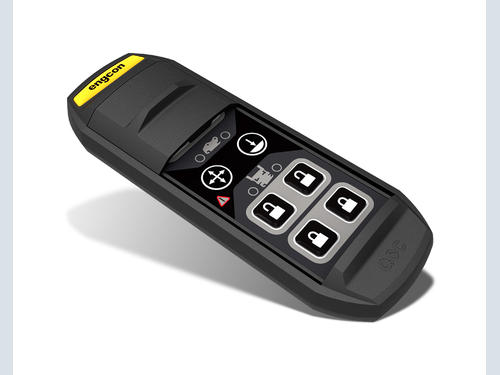 Since its inception 30 years ago, Engcon has been actively involved in driving safety development in the excavation industry. This year is no exception: from 1st October 2020, Engcon will offer the Quick hitch Standard Control (QSC) its safe locking system as standard on all tiltrotators with Engcon's control system. In short, the current system for controlling the bucket lock under the tiltrotator is being replaced by Engcon's standardised locking panel.

Engcon's strategy is to continually improve the excavators' everyday lives with more efficient, flexible and safer solutions. This means, among other things, providing access to smart solutions for everyone, by offering them as standard. The automatic quick mounting system, EC-Oil, has previously been added as an option at no extra charge. Further increasing safety, Engcon will offer the safe locking system QSC under the tiltrotator as standard.

The current system for controlling the bucket lock under the tiltrotator will be replaced with Engcon's standardised locking panel, directing the driver's actions by means of an alert system to ensure correct positioning. In this way, Engcon simplifies the handling of the bucket lock – the hitch control function is standardised, regardless of the make and model of the excavator. This minimises the risks of dropped or swinging tools.

”We usually compare it to the fact that the accelerator and brake pedals would have different placements in a car depending on which car brand it is. In short, if a driver who changes from one excavator to another and can operate it in the same way, the risk of making mistakes with serious consequences is greatly minimised”, says Martin Engström, Product Manager at Engcon.

In addition to the standardisation of the locking procedure, it is also impossible to activate the bucket lock under the tiltrotator while the bucket is hanging in midair – a safety function that is unique to Engcon's locking solution.

”This reduces the greatest risk that a bucket or a tool is accidentally dropped when up in the air. Which can prevent both injuries and deaths,” says Martin Engström.

The locking system, QSC, together with Engcon's quick hitch Q-Safe, also has an audio visual warning system. The system warns with sound and light alarms if the bucket is connected incorrectly. As an accessory you can also order a safety function that locks the excavator's turning movements, which further increases safety.

“To sum up, we continue to standardise for maximum safety and to prevent unnecessary accidents due to mistakes, stress or improper handling. And not only that, it costs nothing extra”, Martin Engström concludes.

Fact box:
QSC meets all current and known upcoming safety standards for safe quick hitches. QSC is part of Engcon's safety concept “Non Accident Generation” and from 1 October 2020 it will be standard on all Engcon's tiltrotators with the DC2 control system.