Everything ready for the 10th steinExpo 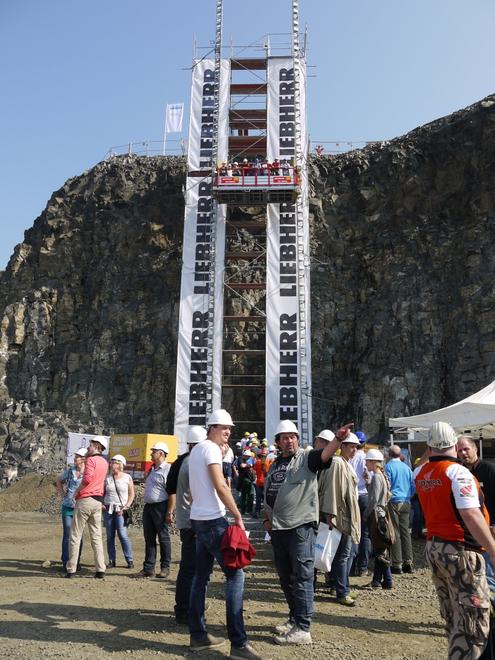 This 10th anniversary steinExpo is entering its hectic phase with a growth rate of more than 10 per cent in exhibitors and brand presence compared to the previous event. 275 exhibitors with 416 trademarks had registered at the end of June. Apart from a few isolated areas, this largest demonstration exhibition of the raw and building materials industry on the European mainland is fully booked. The interest of international exhibitors, whose participation grew to 72 and which corresponds to a significant increase, is particularly surprising. Taking all the participants into account, the international exhibitors thus account for more than 25 per cent of participation in the trade fair.

Trade fair director Dr. Friedhelm Rese and trade fair business unit manager Andrea Friedrich are especially pleased about the increased participation by international exhibitors. This again shows how committed professional partners, including the European Aggregates Association (UEPG), are in their involvement in the development of the steinexpo. The participation of companies from New Zealand or China is also due to the fact that trade visitors to the previous events have spread the reputation of the “live” trade fair across continental borders.

With regard to the success in the participation of national exhibitors, the creators of the exhibition also expressly acknowledge the positive aspects resulting from the tried and tested cooperation with organisations and multipliers such as the German Association of Mineral Resources, MIRO, the relevant trade associations at the Association of German Machinery and Plant Manufacturing, VDMA, and the German Association for Construction Industry Engineers and Professionals, VDBUM.

All in all, the demonstration exhibition enjoys a very positive development, which is associated with high expectations. To not disappoint these expectations, the organisers have committed themselves to steinexpo 2017 in late summer.

More action and better insights
The trade fair (date: 30 August to 2 September) again has 180,000 m² of total surface area to its disposal in the MHI stone quarry in Nieder-Ofleiden, which provides more than 15 per cent additional net exhibition space compared to 2014 with some skilful planning.
Together with the technical planning team of the TU Clausthal, the organisers will once again provide new stimuli for a lively trade fair experience. In the joint demo on area A, visitors can observe 23 large machines with a weight of up to 130 tons at “work” from a 250-seat spectators’ stand. Over the course of the trade fair, the mobile equipment used here will demonstrate perfectly combined charging and transport processes in a total of 101 real-life demonstrations. There will be a caterpillar presentation for the first time and the use of other special equipment is also fitted into the tight schedule.

In addition to the moderated demo area that includes trademarks across the spectrum, which can be viewed from the spectators’ stand, a special non-moderated area is also prepared on level A. Here, various exhibitors will host individual demonstrations of their equipment in the excavated material after prior announcement. If you are interested in a particular brand, you can use this new service as a visitor in consultation with the participating exhibitors.

In addition, the individual demonstrations of mobile equipment, treatment plants and accessory equipment, which are typical to steinexpo, are demonstrated at various other stands in all exhibition areas. Everything around construction machinery is shown on demo area B, while the processing technology is grouped together on area C. The demonstrations follow a user-friendly interrelated schedule. To be in the right place at the right time and to actually see the more than 500 large-scale machines in operation, it is worth taking a look at the demo information in the trade fair catalogue. Two lifts contribute to “doing the rounds” in a more relaxed manner.
Pavilion exhibitors once again benefit from the “open concept” of the large tent halls, which have proven themselves for the first time in 2014, improving the integration of the rather “static” range of products from accessory suppliers and service providers into the vibrant demo environment.

European and world premieres announced
The technical planning team, chaired by Prof. Hossein Tudeshki and Thomas Hardebusch from the TU Clausthal, will as usual continue the work and provide the necessary support for exhibitor requests for the setting up and demonstration of machinery. As usual, the trade fair has received a lot of support from the MHI as the quarry operator.

For their part, the exhibitors are planning excellent demonstrations and are announcing a growing number of relaunches, as well as European and even world premieres in their exhibits. The mostly standard machine sizes in Germany are joined by some construction machine giants that few people have the opportunity to experience every day.

Thinking together into the future
Using the fascination of the steinexpo to target young people is an absolute must. For this reason, the trade fair team has strongly promoted the success of the campaign for technically interested pupils under the heading “ThinkBig”, already known from the bauma, in close co-operation with the VDMA and supported by the Federal Association of German Engineers (MIRO) – and this with success. More than 600 students from grades 8 to 12 had already registered by the end of June.

In addition, visits by whole vocational school classes have been announced. And how enthusiastic especially young people are about the steinexpo is reflected in the increasing frequency of visits to the steinexpo Facebook page by this group. The common goal of all steinexpo network partners is to present the whole industry as attractive to young people as it is. The shovel-and-hammer image of a quarry is noticeably replaced by the much more correct image of a team-led, interesting and modern working environment.

The creators of the steinexpo are also looking to the future in terms of their own development. This is reflected, for example, in the new online ticket system for the trade fair, the increased social media activities, and also in the new helicopter shuttle service to Frankfurt Airport, especially to provide international trade fair visitors with a comfortable transfer service after long travel time.