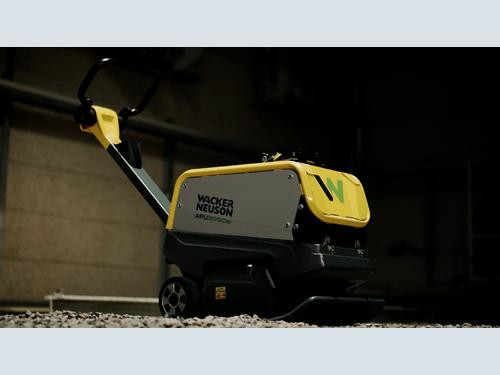 10 weeks to go until Bauma!

In the light equipment segment, Wacker Neuson is unveiling an absolute innovation at Bauma: the first battery-powered reversible vibratory plate with direct drive on the market, further expanding the range of applications for battery plates. The direction of travel is changed using the tried-and-tested hydraulic adjustment system as with conventional models. The APU3050e vibratory plate with a working width of 50 centimeters and a centrifugal force of 30 kilonewtons is characterized by its good maneuverability and, due to the lowest overall height of all reversible vibratory plates on the market, is also ideally suited for use in narrow trenches.

A special feature of the battery-powered plate is the DireX direct drive developed by Wacker Neuson, which ensures greater efficiency, among other things: The vibratory plate works without V-belts and is therefore completely maintenance-free. In addition, the direct energy transmission results in a longer runtime.

Experience the plate live at the Wacker Neuson booth FN.915 at Bauma.