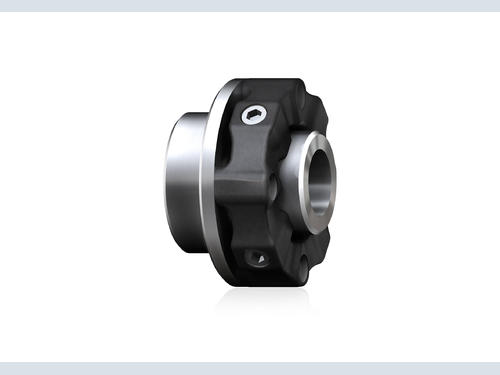 KTR have developed a new all-rounder coupling exploiting a new and very broad range of applications in areas relating to main and auxiliary drives in mechanical and plant engineering. The backlash-free and torsionally soft EVOLASTIC will be available in ten sizes and each ten basic versions for nominal torques from 100 to 5,600 Nm.

The heart of the EVOLASTIC comprises a non-slip elastomer element transmitting the torque to the contacts via vulcanized aluminium jaws. The elastomer connections to the hub or flange are ensured by radial and axial screw fittings. The design assures reliable torque transmission along with a precise prestress in the elastomer. The coupling requires low maintenance and is in a position to compensate for permanent angular misalignments of up to 3° in the homokinetic plane.

The EVOLASTIC expands KTR's coupling range by a backlash-free, torsionally soft all-rounder, for example for applications in frequency-controlled or I. C.- engine drives. The new coupling will be available in ten sizes and each ten basic versions for nominal torques from 100 to 5,600 Nm.

The EVOLASTIC is the first development to evolve from our think tank which opened in Hilden in 2019. The next coupling being developed in the think tank is already well on its way and will be introduced in spring 2021.