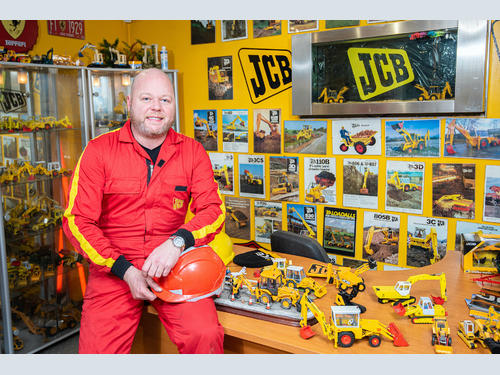 A plant fanatic who used to write to the Chairman of JCB as a teenager now has his own successful quarrying business and has just added a brand new JCB Hydradig 110W Wastemaster to his fleet.

It has been purchased by Landfill & Quarrying company Macwill Services, of Newtownabbey, near Belfast. Owner Christopher McLaughlin is a self-confessed JCB ‘superfan’, refurbishing over 30 JCB machines during his career, and even having a spell working in the factory at JCB’s World HQ in Staffordshire in his late teens.

The new machine is the first of the latest JCB Hydradig models to touch down on Northern Irish soil and boasts an enhanced cab to improve the operator experience, boost productivity and further reduce ownership costs.

Supplied by dealer Dennison JCB, the new Hydradig is being put to use on a range of applications on Macwill Services’ landfill site, quarry and farm estate which, as it is self-contained, has been able to continue operating during the Covid-19 crisis.

Macwill Services Director, Christopher McLaughlin aged 46, said: “I’ve been a JCB fan all my life – some people are fans of Manchester United, I’m a fan of JCB. I’m a JCB nerd and proud of it. My first JCB machine I bought because it was JCB, a second hand 3C Mark 2 which I refurbed and sold on. I’ve refurbished over 30 JCBs over the years.

“I’ve always been interested in and impressed by the Bamford family and the confidence they have in their products. I like that JCB is family-run, like us. I used to write to Lord Bamford when I was 12/13-years-old and was invited to the factory for a visit. I was also lucky enough to meet Mr JCB twice in my life and have his autograph on display in my office. We’ve always been treated very well by JCB.

“We bought the new Hydradig as an all-rounder for doing lots of different jobs. It’s a beautiful machine and beautiful performer. With its versatility it only takes one man to do a lot of work. The array of compatible attachments replaces labour and saves time and money on additional machinery. With the joystick controls it’s like an extension of your own arms. The machine has been slogging its guts out brilliantly – particularly in the landfill site.

“Even as massive JCB fan we did evaluate competitors’ equipment as I always like to make an informed decision but there’s nothing else like it on the market. JCB has really thought about what people need with the Hydradig. The comfort and ease of operation is superb and once you have made the switch you won’t go back. It’s like driving an automatic car for the first time!”

The JCB Hydradig was first introduced as a ground-breaking digging, lifting, loading and tool-carrying machine for urban construction, highway maintenance and municipal operations but has since found favour in numerous additional roles. Key features include: a low centre of gravity to allow stable lifting and excellent travel speeds up to 40km/h between job sites, all-wheel steer enabling maximum urban usability and ground level access to all maintenance points. The redesigned cab on the brand-new Hydradig offers improved forward visibility, which is proving highly beneficial when powering the tiltrotator and wide range of attachments used across Macwill’s site including road sweeper, trailer forks, strimmer and a tilt rotator.

Macwill Services has been established for 35 years and three generations of the McLaughlin family with a 300-acre site comprising of landfill, rock quarry and farm estate. Prominent in Belfast, Macwill Services operates a predominantly JCB fleet boasting a range of JCB machinery from the 1970s through to the modern day.