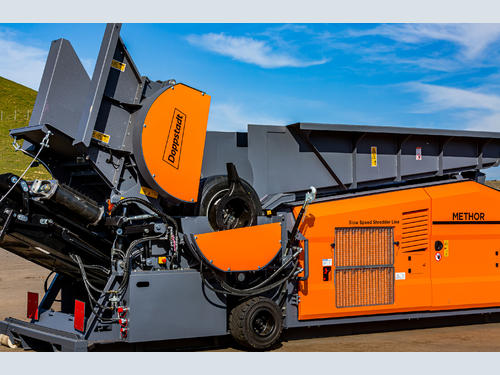 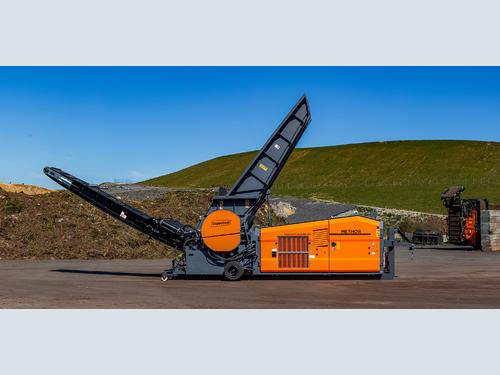 Doppstadt takes a new approach! By unveiling the Methor, the company is presenting a slow speed shredder for the first time that was specifically developed for handling small volume flows. The objective of this completely redesigned system concept: The advantages of Doppstadt’s high-performance technology is being made available to customers who frequently process or shred small quantities, particular batches or materials that change frequently. The result is probably the world’s most flexible single shaft shredder!...

Reduced to the maximum!
Shredding does not get easier when the amount of material decreases! In fact, it’s just the opposite: Processing small volume flows efficiently is a challenge. With the Methor, Doppstadt accepts this challenge! The Velbert-based company has combined its entire know-how and has developed a slow speed shredder that makes professional shredding attractive for a wide variety of applications. With the Methor, container bin services or even smaller recycling operations can profit, for instance, from the advantages of having their own high-quality shredding solution.

Uniquely versatile
The Methor allows operators to respond quickly to changing challenges thanks to its modular design. Every machine is built on the basis of a modular system, which starts with the drive. By default, customers have the option to choose between a diesel engine or an electric motor. That said, it is also possible to get a variation without its own drive system, since the drive train can also be connected to an external engine. Depending on the operating conditions, the Methor can be equipped with a hook lift or with a tracked chassis, allowing it to move independently. The shredding mechanism is also available as a stand-alone component for stationary use.

Well-thought-out shredding system
The shredding system is the heart of the Methor. Here Doppstadt sets new standards: The Methor is the only single shaft shredder in its class with bolt-on tools – and at the same time the system with the largest selection of tools. To this end, shafts are available with different tooth sizes in S, M, L or XL. It can be retrofitted within 60 minutes. To ensure outstanding process reliability even with the Methor’s relatively small shredding chamber, the shaft has been installed horizontally. By doing so, the material is discharged in the conveying direction of the belt.

Highly efficient feed and drive concept
Another highlight of the new Methor is its innovative HydraulicDirect Drive. This hydraulic drive continuously adapts the shredding system’s performance to demand. At the same time, the load torque on the drive is continuously optimized, which has a positive impact on consumption and wear and tear. If the pump pressure increases suddenly as a result of a blockage, the drive automatically switches to the reversing program. The objective of this is to protect the Methor from damage. The load-sensing Smart Hopper material feed works closely together with the HydraulicDirect Drive. It utilizes the pump pressure of the drive to control the angle of the feed hopper. As a result, the Methor can be loaded in relation to the machine's current load, allowing it to operate even more reliably and dynamically.

Smart connected operation
With its rugged construction, precise performance and exceptional flexibility, the Methor continues the trend set by Doppstadt with its “Smart Solutions” – and that in the literal sense! For high-performance process chains, it can be optimally combined, e.g., with the Airflex 1500 air-based separator, the Flex 518 trommel screen or the Selector 400 with the SWS spiral shaft screening deck. Even the operating concept takes into account that the Methor can be used in very different work environments. In addition to using its intuitive control panel, key functions can also be activated using the wireless remote control. The Methor can also be used to set up a WiFi hotspot, allowing it to be configured and monitored using any browser installed on an internet-enabled device.

Market launch in May 2020
After intensive testing, the Methor is about to be officially launched soon. Even though all of the major industry trade shows have been cancelled or postponed, the launch and subsequent sales will take place in May of 2020 as planned.