Goonvean Aggregates increase their efficiency thanks to Finlay Plant SW. 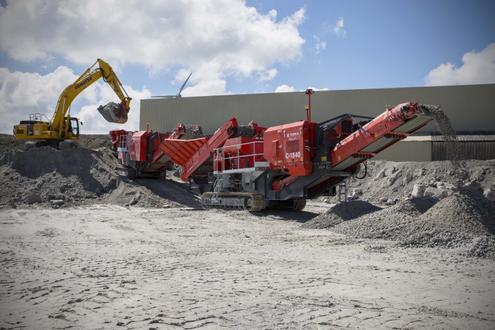 A South West-based aggregate producer has nearly doubled its efficiency with the introduction of three new machines from Finlay Plant SW.

Specified by Finlay Plant SW – part of the Finlay Group of companies – the site has seen a 40% increase in production since the arrival of the new plant.

The machines, which are replacing a 20-year-old static plant, are offering the latest in crushing and screening technology to produce a high-quality, end product, while at the same time reducing running costs.

Kevin Foley, General Manager of Goonvean Aggregates, said: “We’re really impressed with the new plant. Technology has moved forward a great deal in the last few years and we’ve seen this with the new machinery we’ve had. They’re proving to be cheaper to run and we’re getting a far higher output as well.”

Working together, the machines are producing approximately 120-140 tonnes an hour at St Stephen, one of Goonvean Aggregates’ four sites in the region.

The Terex Finlay J-1175, a high performance tracked mobile jaw crusher, is fed with blasted rock, which is crushed and then fed in to the Terex Finlay C-1540.

Ideal for medium sized producers and contract crushing operators, the cone crusher is producing 803 for South West road construction, other products include material supplies for ready mix, asphalt as well as an all-in aggregate for block production.

Designed to work after a primary crusher or on its own as a frontline tracked mobile screening machine, the Terex Finlay 883+ has a dual purpose for the company.

It is used as a pre-screen prior to the jaw crusher to remove fines from the material as well as screening the processed product from the cone crusher, producing a 20mm, 10mm and 6mm aggregate.

The company also has a sand plant operation producing washed specialist sand and gravel for the construction market.

Previously part of a china clay operation formed in 1932, it evolved as a new company in 2012 and now employs 19 operatives and six office-based staff.

Delivered at the start of summer, these are the first machines that the company has purchased from Finlay Plant SW.

Kevin added: “We asked companies who had dealt with the Finlay Group and they said that their service and back-up was exceptionally good. After a lot of research and visits to various sites we chose the Terex Finlay machines because of the design and build quality.”

Gareth Johnson, Managing Director of Finlay Plant SW, said: “These three machines are ideal for quarrying, mining, demolition and recycling applications. The Terex Finlay 883+ has the capacity to process up to 500 tph, so it’s no wonder Goonvean Aggregates has seen such an increase in productivity. Finlay Plant SW is delighted to be able to supply Goonvean Aggregates with their first mobile equipment and we hope the relationship will be one that will continue for many years.”

To see a video of the machines in action visit https://youtu.be/S5ccdIpXMhs