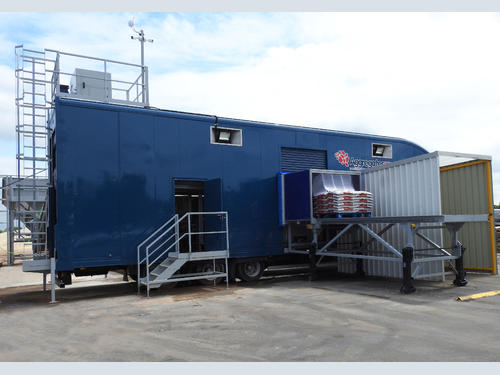 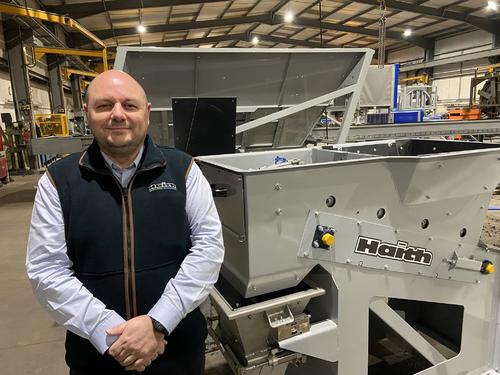 The company, which currently has five mobile baggers in production for some of the UK's leading aggregate suppliers, has seen its turnover almost double year on year.

Haith is best known for its range of vegetable handling machines and turnkey solutions for food processors but has been active in aggregates and industrial installations since 1970.

In the spring of 2021, Haith changed its internal structure, promoting Paul Ramplin to the role of technical sales manager, which according to the company's managing director, Duane Hill, brought a renewed focus on growing the industrial side of the business.

"We have always enjoyed success in aggregates and industrial projects, but the opportunities have come to us rather than us proactively seeking them out," says Mr Hill. "By asking Paul to head up the industrial side of the business, we have become a lot more proactive and have worked hard to get our name out there. Our efforts have paid off, and we've seen turnover increase by 79%, which is an amazing achievement! I need to thank Paul and his team for their efforts in one of the most challenging years we have ever known. They've worked incredibly hard, and it is very much appreciated."

As well as a record year, having five orders for its mobile bagging system at any one time is also another first for Haith.

"We seem to have hit the sweet spot of functionality, efficiency and price point with our mobile bagging system," says Paul. "It has proven incredibly popular this year and is helping several leading suppliers of decorative aggregates meet the increase in demand from homeowners who are spending their disposable income on home improvements rather than holidays and cars due to the pandemic."

Developed by Haith Group in 2010, the Mobile Bagger can operate from mains power or a generator to offer a cost-effective way of packing on-site without the expense of installing a fixed-line.

The machine features a 20-tonne feed hopper with specially designed twin remote mounted vibratory side panels that transmit all the vibratory energy into the material and not the hopper's walls.

A 600mm wide heavy-duty conveyor fitted with Haith's unique quick-adjust skirting clamp system sits under the feed hopper. Haith has designed the hopper and conveyor system to be off-loaded from transport and erected by a forklift truck without the need for a crane.

The feed conveyor delivers the material into the mobile bagging system through a hole in the roof. The aggregate is fed into a metering conveyor with level control to automatically control the feed conveyor.

A lined transfer chute underneath the metering conveyor directs the aggregates into a GIC5100 vertical form fill and seal packaging machine.

The packed bags of aggregates are transferred from the GIC machine by an inclined conveyor, which elevates the packs and feeds them onto a declined square roller conveyor that joggles the aggregate in the bags, levelling the material inside them.

Once full, the bags are transferred onto a flattener conveyor with an adjustable twin roll bag press that can be set to push the aggregate into the bag's full envelope, which produces a square pallet pack.

Bags move from the flattener conveyor onto a pick-up roller conveyor fitted with a load cell weigh system that controls the metering conveyor run time or volume delivered into each bag. The weighing system can be set with upper and lower bag tolerance weights. Should a bag be under or overweight, a Kawasaki CP180 robot will pick the bag off the pick-up table and wait for the operator to accept or reject it. Haith has also incorporated spill sensors mounted along the conveyor system to prevent split bags from being placed on the pallet. All rejected bags are placed on the floor in front of the robot for removal.

The final stage of the process sees the empty pallets being fed one at a time from an automatic pallet magazine onto a powered roller conveyor and transferred into the stacking cell. The full pallets are transferred out of the stacking cell and onto a 90-degree transfer table which moves the full pallets out of the trailer and onto an accumulation roller conveyor for removal by forklift truck.