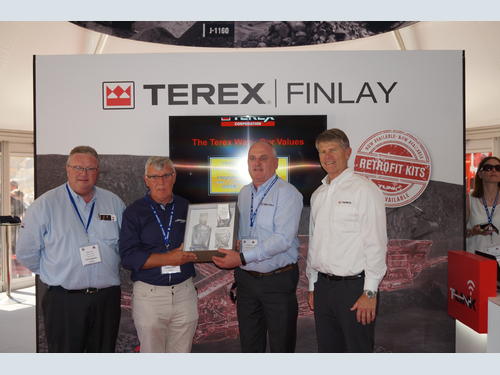 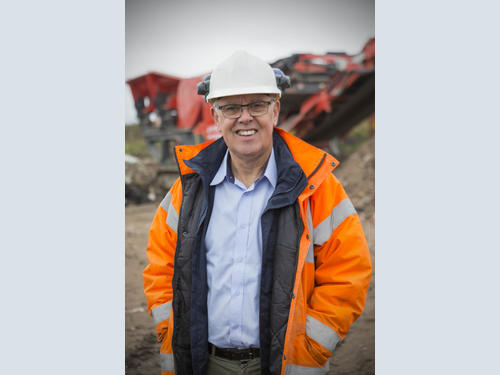 The materials processing sector came together at Hillhead to celebrate the retirement of a popular industry character.

Charlie Nairn’s colleagues and friends from across the UK and beyond attended a surprise presentation for the Finlay Group Northern Managing Director at the event.

Held on the Terex Finlay stand, Nigel Irvine, Sales Director of Terex Finlay was the speaker who paid tribute to him in front of a crowded audience. A crystal whiskey decanter and glasses were also presented, to mark a career that stretches back decades in the industry.

Charlie started his career at Whatlings Ltd in Glasgow, where he began his five-year apprenticeship in plant fitting, looking after both static and mobile plant. From there he went to Stewart Plant Ltd, again in Glasgow, repairing a wide variety of plant, including mobile cranes.

Work then took him further afield, including offshore on the oil rigs and even up to the Shetland Islands, before he started work with the Finlay Group – then known as Sure Equipment, in the mid-1980s as a Service Engineer. Within in the first year of being with the company, Charlie was asked to move into sales, working with customers in the North of England and colleague Trevor Tick.

The hire fleet was built up, with customers in steel works, deep and open-cast mining as well as quarrying. At this time, Charlie is believed to have had about 70 per cent of the entire hire fleet working in the north of England.

Charlie was also responsible for supplying washing plants in the North of England, before the Finlay Group company APS was established.

Since then, other key milestones have included Charlie becoming Director of the Finlay Northern and also working on the development of the Terex Finlay Spaleck range within the Finlay Group – with the help of his son Martin, who joined the company in 2008.

Martin said: “I’ve always admired my dad and how hard he’s worked and this was a good opportunity for me to follow in his footsteps.”

In the first couple of years of selling the new range, the duo sold more Terex Finlay Spalecks than the whole of Europe put together.

Charlie has also played a key role in the development of the Kiverco waste recycling machinery partnership with the Finlay Group.

During Charlie’s time with the company, he has formed friendships with a huge number of customers as well as staff members - in particular Trevor Tick, John Dunne, Dennis Row and David Statham.

Charlie’s said: “The presentation at Hillhead was a great surprise and much appreciated, I’ve had a great time in this industry. My main highlight over the 34 years has been watching the company grow and develop into what it is today. Knowing that we played a part in the company’s success back in the beginning is very special, as well as watching my son Martin develop within the business; I’ve taken every day as it comes, and each one has been different.”

Across the industry, there was no shortage of people wanting to thank Charlie for his support and friendship over the years.

Martin Gray, of Harsco, said: “Charlie is a lovely and genuine bloke, both personally and professionally, not many people work in business as long as him and still have such a smile on their face, it’s been a pleasure doing business with him.”

Another person who has worked closely with Charlie over the years is Alan Simmester, of A.J.S. Plant Services Ltd. He said: “Charlie interviewed me when I applied to the Finlay Group to be a Plant Fitter. I worked with him for five years and he was a good boss, would always listen and was very fair. When I moved to Humberside Aggregates we still maintained a great working relationship; with Charlie what you see is what you get, a genuine guy who will always try to help you.”

Ronnie Harrod, of Catplant, has known Charlie for nearly two decades. He said: “My first encounter with Charlie was when we visited his office and bought one of the first Supertrack machines more than 18 years ago. Since then we’ve gone on to buy lots more plant from him, I wish him all the best in his retirement.”