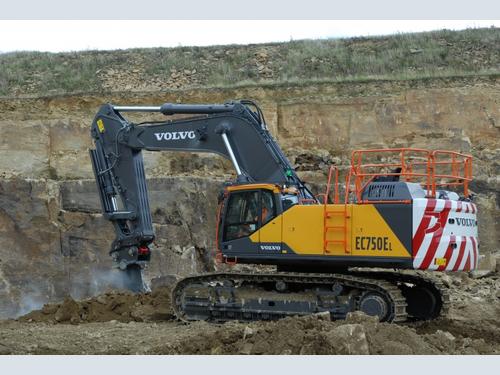 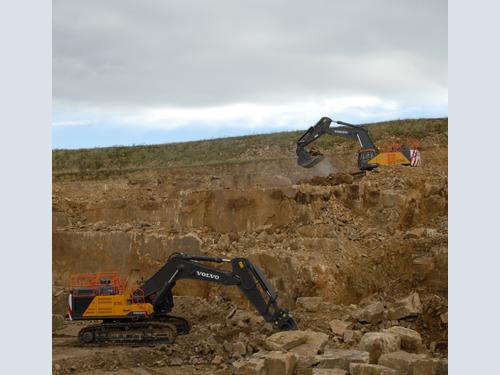 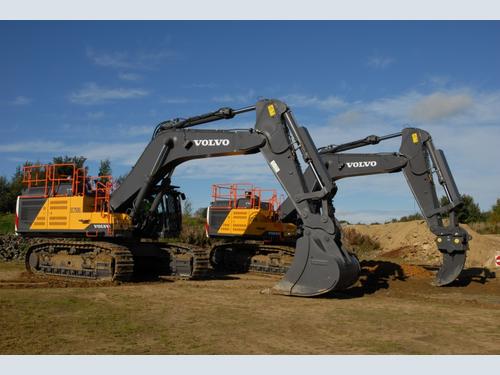 Johnsons Wellfield of Huddersfield, West Yorkshire, has made a significant investment in purchasing a brace of seventy-five tonne Volvo EC750E excavators which take charge as primary movers in extracting Yorkstone blocks at the company’s Crosland Hill Quarry.

The two new arrivals replace competitive makes of a similar tonnage and were chosen following a competitive tender process but, more importantly, the decision to opt for more Volvo machines was due to the high reliability and productivity of the seventy-tonne EC700C purchased in the spring of 2016, according to Managing Director, James Berry. “We’ve been very pleased with the performance of our EC700C in terms of its capability at the quarry face and its reliability,” says James. “It hasn’t missed a beat in this very hard and demanding application of prising large dimensioned Yorkstone blocks directly from the face.”

The purchase of Volvo’s latest flagship excavators coincides with the company’s’ plans to extend the quarrying activities at the Crosland Hill facility. Another factor in the purchasing decision was down to the EC750E’s ultra-low, external noise emission measuring just 108 dB(A) according to ISO 6395.

Both machines will work as a team prising out large Yorkstone blocks and handling overburden material. To facilitate this, they’ve been equipped in Mass Excavation configuration compete with hydraulic attachment brackets, heavy duty 4.4m³ Extreme rock buckets and heavy-duty ripper tooth. Thus equipped, the EC750E provides a maximum breakout force of 383 kN and a tearout force of 337kN. The combination of the 6.6m boom and 2.9m dipper arm (mass excavation) gives a maximum reach of 11.46 metres and a generous dig depth of 7.2 metres.

At the heart of the EC750E is a 16-litre, Stage-III V-ACT engine developing 533 nett hp that operates in conjunction with an advanced mode control-system, ensuring the maximum possible hydraulic horsepower available is delivered at a constant engine speed under varying load conditions. A maximum torque of 2570Nm is achieved at just 1350r/min, and this, in conjunction with the machine’s advanced hydraulic system, ensures maximum fuel-efficiency is achieved through every work cycle.

“We’re more than confident that the additional operating weight, engine power and breakout force of the EC750E over the EC700C will guarantee the production requirements we are looking for, going forward,” says James Berry.

Besides the existing EC700C, the two new arrivals join a fleet of predominantly Volvo-badged equipment, including articulated haulers, wheeled loaders and smaller excavators.

Johnsons Wellfield, a family-run business now in its fourth generation, specialises in primary block extraction and the processing of dimensional stone from its 300-acre site on the outskirts of Huddersfield. The company has the largest facility in the UK for cutting and processing, what is referred to as ‘buff hard’ Yorkstone, with the finished material adorning prestigious buildings and famous structures throughout the UK, including the Thames Embankment, the Houses of Parliament and Victoria & Albert Museum.