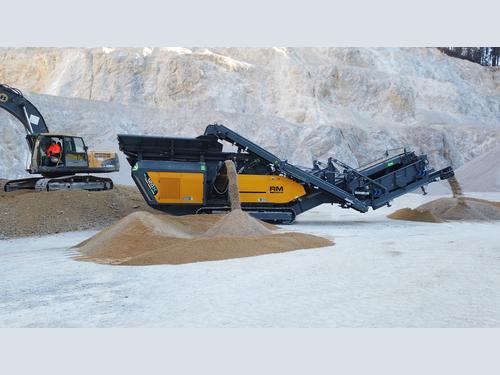 Rubble Master is a world leader in the design and manufacture of mobile crushers and screeners used in the mineral processing, aggregates and material recycling industries. Rubble Master is utilising the COMBIVERT F6 servo drive to control a three-phase asynchronous motor on its new 120GO series of hybrid crushers. The requirements at Rubble Master were that the servo drives should be robust, small, while at the same time being powerful and highly efficient. The 120GO hybrid crushers weigh in at 15 to 40 tonnes and rely on the COMBIVERT F6 size 7 version with an output of up to 200kW.

"We set standards in the electrification of mobile crushers and screeners and we’re going to do the same with hybrid systems. KEB is the right partner for this," explains Markus Gaggl, Chief Technology Officer at Rubble Master.

In combination with the three-phase asynchronous motors, the result is the perfect combination for Rubble Master. "By working with KEB, our customers benefit from lower service costs, for example, as an electric drive is significantly more efficient and less susceptible than hydraulic offerings from competitors," says Gaggl.

When developing its new hybrid series of mobile crushers, Rubble Master had challenges with finding a suitable servo drive that was small enough and that could be water-cooled as the machines work in harsh, dirty environments.

As Jeffrey Ton, Head of Power Train and Controls at Rubble Master explains: "KEB had the perfect solution. For us, the important thing is that we can have it sensorless as well as having some safety features that are beneficial for our machine. Also, it’s [the F6] a bit smaller, which for us is the next step forward."

"Building a prototype is always a bit of learning process. Of course, we had some problems initially but KEB was immediately there to help out. Together, we built a separate prototype to do some simulation and which solved our problems. Now we have the servo drive and the other components such as the electric motor in our machine."

"They [KEB] proactively ask how our machine is working afterwards. It’s not only doing the project but also later that you really do have the feeling that KEB wants to be a partner and not just a supplier, which is good for our business," adds Ton.

The COMBIVERT F6 is a range of high performance single-axis drive controllers that are extremely compact, energy efficient and flexible for a wide variety of control applications in automated, safety-oriented machines. The drives provide optimal motor control in real time, as well as integrated safety functionality. The COMBIVERT F6 is 100% in-house designed and built by KEB Automation. The drives are available in seven different enclosure sizes and power ranges from 4kW up to 400kW. The drives are air- or liquid-cooled and can be customised with a variety of design options to suit the specific application. Safety functionality can be selected in modules to suit the requirements of the machine. Typical applications include materials handling, textiles, plastics, processing technology, machine tools, food and beverage processing and packaging, robotics, woodworking, and renewable energy systems such as wind turbines.

Compared to its predecessor, the COMBIVERT F5, the F6 is much more compact, which helps reduce the space needed in control cabinets by up to 76 per cent. In addition, the innovative power stage design of the F6 reduces power losses by up to 50 per cent, which means KEB’s customers can design machines that are more compact, lighter and more cost effective with integral safety functionality.

As Markus Gaggl concludes: "We’re very proud to have KEB as our partner, especially when we are looking into the future and wanting to set new standards with hybrid systems."