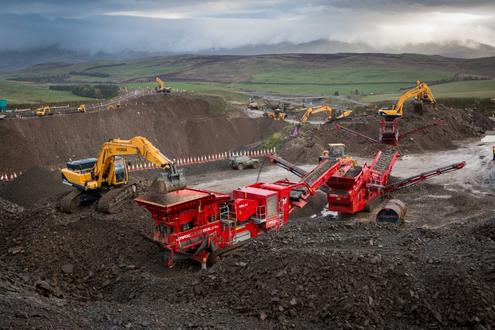 L&W Wilson has been a family run business since 1951 when it was established as a transport company with two wagons with a licence to transport road and building materials, furniture and household effects, agricultural produce, requisites and livestock within 30 miles and coal and coke within 10 miles of Kendall Town Hall.

By 1973 the company had moved to Endmoor, near Kendall and the company had diversified the business to include excavation, demolition, site clearance, haulage and tipping work.

Alan Wilson – MD, takes up the story, “In 1996 with work being thin on the ground we moved into contracting which enabled us to guarantee that the demolition, bulk excavation, foundation and drainage work for new sites was ours, we had problems in the early 1990’s with other contractors trying to poach work when the plant was hired.”

Contracting also meant that the company was involved in a lot of quarry work and for a few years stone was sourced from local quarries, however every year the price increased for the stone which included the haulage.

Alan, continued, “We really wanted to buy the stone ex works as we were transporting it, but the quarries would charge a premium for collecting ex works. However, in 1996 we were employed to screen stone for a large road contract in a quarry at Kirby in Furness which we accomplished by hiring a mobile screen which enabled us to also use the by-products for some of our jobs. After that I approached the Quarry Manager he agreed we could crush stone on-site if we paid a royalty. This became a regular occurrence where we would hire in a crusher to produce aggregate and by 2000 we decided to purchase our own equipment as our workload was increasing.”

At this time the company were recycling at Roan Edge where demolition rubble was being crushed to make a recycled 6F2. To add to this the company were also offered crushing at Elterwater Quarry and on various demolition sites. A mobile crusher was acquired in March 2000 and an impactor followed a year later.

With the quarry at Kirby in Furness then selling a mulch product an impactor was required to produce an improved flatter shape which would compete with the Welsh Quarries. Additionally, the High Newton by-pass contract came on stream with the company required to supply of 200,000 tons of MOT type 1, a 6N and a 6F2.

“It was a very busy time”, commented Alan, “but by this time we had purchased a bigger impactor and in 2007 we bought a second one because we were flat out making material for the by-pass, in addition to our other work. We also bought a bigger jaw crusher and a cone crusher to shape the stone to make a rounder, squarer product, so the cone was ideal for that as a secondary crusher. “

By 2008 the company had built up the civil engineering side of the business with commercial and industrial work as well as carrying out all the groundworks for housing estates.

Later that year everything came to an abrupt halt and within 12 months the turnover had dropped by £4 million with further losses incurred from companies going bankrupt. These were difficult times, but the company survived on construction type work and today with housing work now back the company’s turnover has bounced back to £17 million with the company now employing their own team and managing everything in-house.

Alan continued, “Crushing our own stone and making our own products was now high on the agenda and although we were still crushing at Kirby in Furness we now had our own site at Roan Edge. Although I sold a cone in 2008 we kept everything else working and with things improving in 2010 we got a great deal on a Hyundai digger from Taylor & Braithwaite (T&B) and a few months later we purchased a shovel from them. The machines have been excellent and over a period of seven years we have bought several machines from T&B who have supported us well. It’s been a great relationship and when they approached us to consider holding an open day at Roan Edge in 2014 we saw it as an opportunity to support them and also tidy the site up and screen a lot of material.”

An introduction to Maximus:
The open day at Roan Edge Quarry was a huge success for T&B as they had just become the Maximus dealer, and this was the first opportunity the machines could be demonstrated at an open day to potential buyers. For Alan Wilson it was his first introduction to the brand and he was very impressed by what he saw.

Alan, commented, “We had a damaged screener that was causing problems so after the open day we sat down with Ian Burton and he gave us a great deal on a Maximus 516 Vibrating Scalper.”

Ian Burton- Sales Director - T&B, “Alan was very impressed with the Maximus machine and quickly realised the advantages as the machine gives you a lot higher stockpiling height than other machines. This allows uninterrupted working as you can leave the excavator feeding the machine whilst the shovel loads trucks, so production doesn’t stop. The Maximus 516 was an ideal machine for Alan it is a heavy duty, high capacity scalper capable of screening a wide variety of material in the harshest conditions. It is designed to cope with the heaviest applications and can be used in construction and demolition waste, primary crusher circuits, iron ore, aggregates, coal, recycling, heavy rock and topsoil.”

Adding to the fleet:
Six months later Alan invested in another Maximus machine and has since purchased a total of three 516 Vibrating Scalpers

In addition, there has been further investment in two more Maximus machines which included a 512 Vibrating Scalper and a 522T Triple Deck Vibrating Screener bringing the fleet to a total of five machines.

Although a smaller machine than the 516 the 512 Vibrating Scalper has been developed for the smaller end user who require its versatility and ease of transport, without compromising on build quality and reliability. Designed to cope with the heaviest applications, the Maximus 512 can be used in crushing circuits, demolition and construction waste management, aggregates, heavy rock and topsoil applications, as well as many others.

An industry leader:
Alan’s fifth machine which is currently on duty at Roan Edge is the Maximus 522T Triple Deck Vibrating Screener which is the industry leader other triple decks aspire to. With industry leading production capacities and the largest combined screening area available in today’s market, the Maximus 522T is the obvious choice for large scale operators who need high capacity and high specification aggregate screening capabilities.

Alan, added, “We have five machines now and I have every faith in the Maximus brand and the support from T&B.”

Additional crushing investment:
Since then T&B became the Northern distributor for Rubble Master in August 2017 and two months ago L&W Wilson became a proud owner of a RM90GO!

Alan, said, “A very impressive machine that crushes a phenomenal amount of stone per hour and because of its size is an absolute winner on small sites. When I first saw it in operation I realised it crushes twice the amount you would expect for a machine of that size; I would definitely recommend it!”

Today Roan Edge Quarry is proof of efficient and reliable stone processing with the RM90GO! crushing and feeding a Maximus 522T Triple Deck Screener to produce aggregates and putting a smile on everyone’s face.