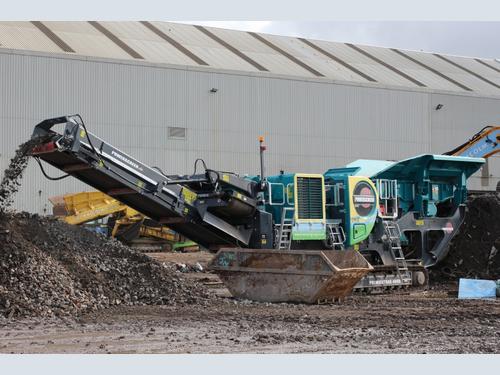 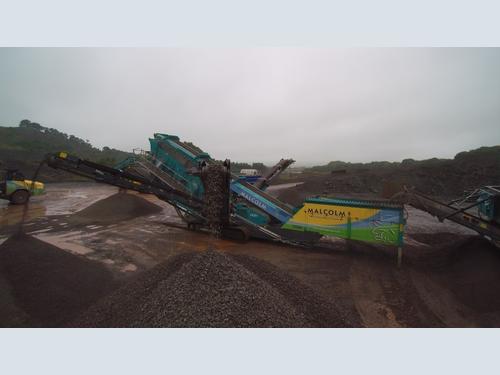 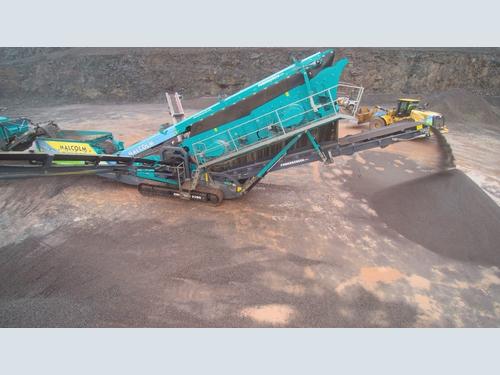 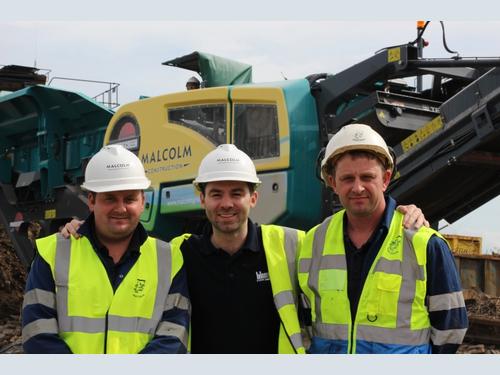 The Malcolm Group have recently purchased three new Powerscreen machines from Blue Machinery Scotland to work in various areas of the business. A Chieftain 2200 mobile screen has been taken to process Whinstone within their Loanhead Quarry and two Premiertrak 400X jaw crushers will be working at the organisations facility on South Street in Glasgow, crushing the C&D waste deposited at the site, and at Shewalton Quarry also crushing C&D Waste

Originating as a family-owned business in the 1920’s, The Malcolm Group is now considered to be one of the leading providers of Construction, Logistics and Maintenance services in the UK. The organisation employs over 2,000 people across the business, and is quoted on the London Stock Exchange with turnover in excess of £200 million.

The new Premiertrak 400X was launched just a few months ago by Powerscreen, and while the new purchase by Malcolms replaces a highly reliable Pegson jaw crusher, Willie Gregory, Operations Manager at the South Street Recycling site has noticed a number of benefits, commenting, “We take in a lot of waste which contains rebar, so the adjustable deflector plate and skirts beneath the jaw chamber help ensure it doesn’t get snagged and effect the machine’s processing. Plus of course it protects the belt. On the rare occasions this happens however, there is excellent access underneath the machine, enabling us to get the machine back up and running quickly.”

Other aspects of the machine highlighted by Willie was its processing power, and its reliability. As Willie said, “The machine has not missed a beat since it came in to the site and it’s also very quiet compared to the old machine”.

The second Premiertrak 400X is working at Shewalton Quarry, crushing the material for the wash plant. Material is deposited from sites all over Ayrshire and crushed by the mobile jaw crusher before being fed to a Chieftain screen which is taking off the <45mm for the wash plant. The remaining 45mm-100mm is sold as 6F5,

“John Edgar, Site Manager at Shewalton said, “After sales and customer care has been spot on. One of the reasons we bought from Blue is the support we have had in the past, plus Owen Gourlay, Customer support Manager at Blue Scotland came in and did a day’s training with the guys to get them all up to speed. You will always have a few niggles with a new machine and Blue have been in right away to sort them out.”

The new Chieftain is processing the Whinstone which is being crushed by an existing Powerscreen 1150 Maxtrak cone crusher, and is again impressing the team at Loanhead Quarry for a number of reasons. Firstly Gordon Lawns, Operations Manager, has noticed a considerable increase in production, from around 125 tonnes per hour to around 250 tonnes per hour. Not only that, but the separation in to the 40mm–20mm, 20mm-14mm and 14mm-6mm, as well as dust, are exceptionally accurate due to the large screening area and aggressive screen boxes which can switch between a 2 and 4 bearing set up. This aggression on the screen boxes also helps to keep the screens clean, again helping with product specification even though the material at Loanhead can be very sticky, especially in damp conditions.

Commenting on the machine Willie Nisbet, Site Operator at Loanhead Quarry said. “We can work the Chieftain 2200 with the big Premiertrak 600 jaw crusher and the 1300 Maxtrak cone crusher. It’s the first time I have seen a screen be able to cope with that amount of material and provide such a quality product”

These three latest acquisitions to the Malcolm Group fleet takes their total number of Powerscreen machines to nine.