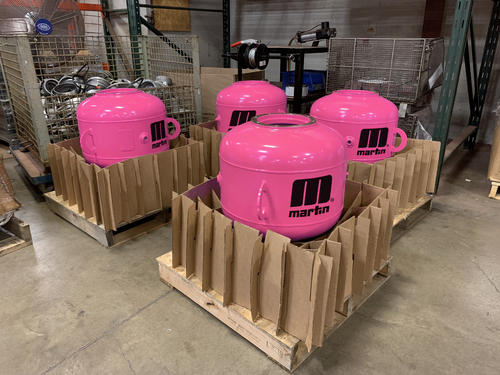 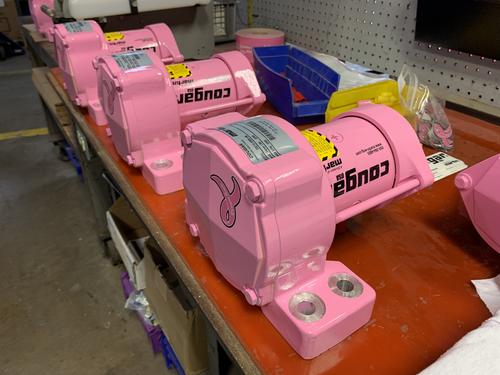 The global leader in bulk material handling technologies and training has announced the completion of this year’s annual program to support breast cancer education, screening, treatment and research around the world.  Martin Engineering continued the effort rolled out in 2017, contributing a portion of its sales revenue from the company’s popular air cannons and truck vibrators during the month of October to support the Susan G. Komen® organization, inviting customers to “go pink” and honor all those affected by the disease.  The company donated $50 for every Martin truck vibrator and $100 for each 70-liter air cannon, with the units’ traditional paint scheme replaced by the iconic pink color adopted by the organization.

“We’re excited to get this program back on track after the COVID year in 2020,” said Vibration Business Development Manager Susie Orlandi.  “Every contribution is a small step that supports those in need today, while the researchers continue their work for a cure.”  This year the firm supplemented its regular annual donation with $8,950 from the fundraising campaign.

“October is National Breast Cancer Awareness Month in the U.S.,” she continued.  “As a family-owned company of four generations with over 900 employees making up our extended family, Martin Engineering is acutely familiar with the impact breast cancer has on individuals, families, friends, colleagues and communities.  This disease affects such a large number of people that just about all of us have been touched by it in some way.”

In addition to its donations, Martin Engineering also created a team to participate in the 2021 Komen Peoria MORE THAN PINK WALK® on October 2nd to raise awareness and encourage contributions to this worthy cause.  Orlandi led a group of cancer survivors at the event and took part in the opening ceremony, representing Martin Engineering as an Action Pillar Sponsor.

“Support from efforts like this helps us get one step closer to a world without breast cancer,” Orlandi added.  “We chose the Komen Foundation so that the funds we raise will directly support breakthrough research and provide help for the women and men facing breast cancer.  Whether it’s emotional support via the helpline, financial support through the treatment assistance program, or help navigating their care journey, we know the organization will be there for them.”

According to the National Breast Cancer Foundation®, about one in every eight women will be diagnosed with breast cancer in her lifetime, along with thousands of men.  At this point, doctors don’t know the exact causes, and it’s rarely possible to determine why one person develops the disease and another doesn’t.  But research has identified a number of risk factors, along with early detection techniques and advanced treatments.

The Susan G. Komen Foundation was created in 1982, launching its famous Race for the Cure® shortly thereafter.  The organization has contributed to a number of advancements, including the identification of genetic links, less-invasive surgical techniques and advanced drug therapies, as well as advocating for more federal funding of additional research and early detection programs.

The foundation has invested over $3 billion in more than 60 countries since it was formed -- helping to reduce breast cancer-related deaths by an estimated 40% -- with an emphasis on supporting those with the fewest resources.  With treatment options, community outreach, advocacy and other programs around the world, the organization has played a critical role in virtually every major advance to combat breast cancer – transforming how the world talks about and treats the disease and helping millions of breast cancer patients become cancer survivors.

“Programs like this generate media exposure and get people talking,” Orlandi added.  “Many of our customers agreed to join us in this fight, placing orders at this critical time to contribute to its success.”

Martin Engineering has been a global innovator in bulk material handling applications for more than 75 years, with its industrial vibrators and air cannons both improving safety and productivity in mining, coal handling, cement manufacturing and a broad array of other industries.  The firm specializes in advanced technologies for improving the performance of conveying systems, high-temperature processing, storage and transport of bulk materials.

The company has a legacy of support for the Susan G. Komen foundation over the years, thanks to a similar family history.  “The Komen family has roots in the Peoria area, much like our own,” added Martin Engineering Chairman Ed Peterson.  “So, we’ve always felt a special connection to the cause.”