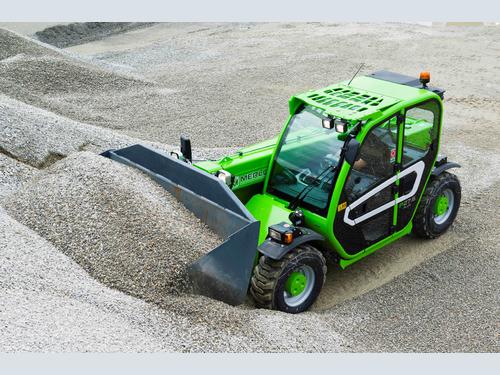 Since their appointment as distributors in Ireland for the Italian-made Merlo range of telehandlers, Birdhill and Rathcoole-based McHale Plant Sales has actively pursued the goal of expanding its user base into sectors of the market where its presence had been under-represented.

With the arrival of the brand’s Multifarmer model – a highly versatile model that is all-telehandler at the front and all-tractor at the rear – Merlo has established a significant customer base amongst farmers and agri-contractors. Now, with the availability of its electric-powered eWorker, it is expected that openings will present in those sectors where noise abatement and emissions-free operation are paramount.

According to McHale general manager, Denis McGrath, their policy of “looking beyond the horizon” to find new customer applications paid off in the case of stone and aggregates specialists, Leahy Stone.

According to McGrath, “last year, Merlo broke into the stones and aggregates sector when the Limerick/Cork-based business purchased a compact P27.6 model. Now, barely one year later, the company has added to its fleet, taking delivery of two more Merlo units – another P27.6, and the more powerful, mid-size TF33.7 Turbofarmer model, whose versatility in terms of fitments makes it even more valuable across the company’s full range of uses”.

At its core, Munster-based Leahy Stone is a major supplier of stone chippings and a significant user in its own right, with two facilities in operation – one in Kilfinane, Co. Limerick and one in Fermoy. Head of the family business is Tommy Leahy who, with family and colleagues, have been meeting the needs of customers throughout Munster and beyond for over 30 years. Typically, the company has established its reputation as a major supplier and contractor in the construction of farm roadways and in the laying of driveways into residential properties.

Commenting on his decision to double his investment in Merlo, Leahy said:  “When you’re in the rock and stone business, any machine you buy would need to be fit for the rough and tough that it has to deal with, year in and year out. Because of its unyielding weight and roughness, the scooping, lifting, bagging and loading of bulk stone are tasks that call for machines that have the power and durability needed. In that respect, our Merlo machines have proven themselves fit for the work what we need to do”.

Other sectors in which Merlo has been expanding its footprint include such sectors as waste management, food, vegetable and animal feed production, and timber processing. “With the development by Merlo of even more innovative products – an electric-powered,  step-on, step-off load carrier being one of the latest examples – the process of breaking into new markets will accelerate,” McGrath said.