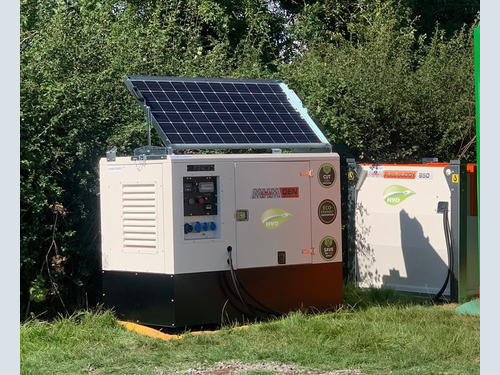 The MHM Group have confirmed that all their diesel powered machinery, principally generators and lighting towers are now fully compatible with HVO fuel.

For rental firms and contractors which are not familiar with HVO fuel, it is a renewable diesel alternative based on vegetable oils, grease and similar residue. Using HVO fuel can reduce CO₂ emissions by up to 90% when likened with fossil-fuel diesel. For every 1,000 litres of diesel burned produces 3.6 tonnes of greenhouse gas CO2, compared to just 195kg GHG CO2 for every 1,000 litres of HVO burned. In addition, HVO is FAME (Fatty Acid Methyl Ester) free fuel and is wholly compatible, and approved to use, as an alternative replacement fuel to traditional fossil-fuel diesel.  Using HVO fuel can significantly reduce a user’s carbon footprint.

HVO fuel can be safely stored for up to ten years, whereas regular diesel, even under ideal conditions, can only be stored between six and twelve months. Therefore, using HVO can reduce the possibility of fuel contamination, breakdowns and fuel testing. Tests have indicated that HVO fuel provides better starting, cleaner combustion and consequently less chance of waxing and water retention in extreme temperatures.

MHM have placed just one stipulation on the use of HVO fuel. All HVO fuel used in MHM equipment must adhere to BS EN 15940:2016. If a re-hirer or purchaser of an MHM generator or lighting tower uses a lower grade fuel this could have a negative impact on the engine’s warranty. MHM recommend HVO from the fuel specialist, Crown Oil. Crown Oil HVO fuel is available for delivery across the UK usually within 48 hours of order.

Commenting on this latest approach to reducing the carbon footprint within the rental markets, the MHM Group managing director, Mat Llewellyn said, “We are moving forward with plans to ensure that our rehire fleet becomes entirely emission-free. Using HVO is significant a part of this process, however we are continuing to invest heavily in other renewables such as solar and battery hybrid machines.”

“Many of the major UK infrastructure projects are promoting the use of HVO and several fleet operators working on these projects have already switched to HVO,” added Mat.

The MHM ReHire service is only available to UK and Ireland hire organisations.

The MHM Group was incorporated in 2010 and supplies their range of equipment throughout the UK and Ireland via its’ nationwide three depot network. The company has three distinct divisions; MHM New Equipment Sales, MHM Used Equipment Sales and MHM Rehire. Each division supplies power generation, solar-hybrid-generators, fluid storage, lighting towers, and product related accessories to the UK and Irish rental markets. The MHM Group head office is based in Port Talbot, South Wales.