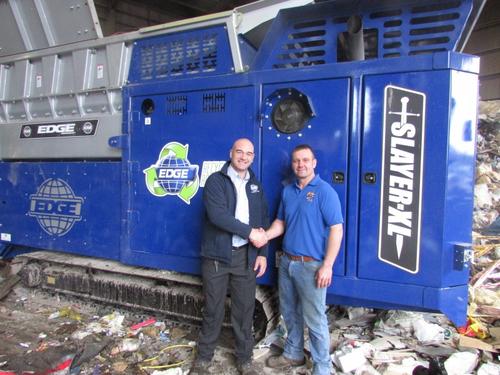 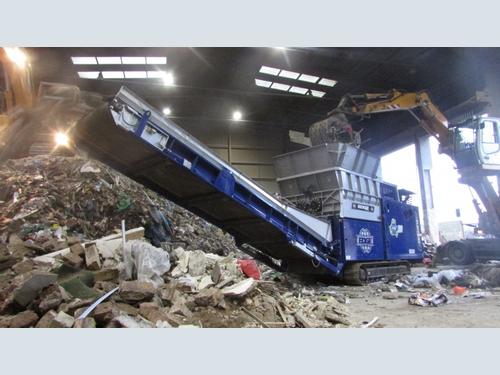 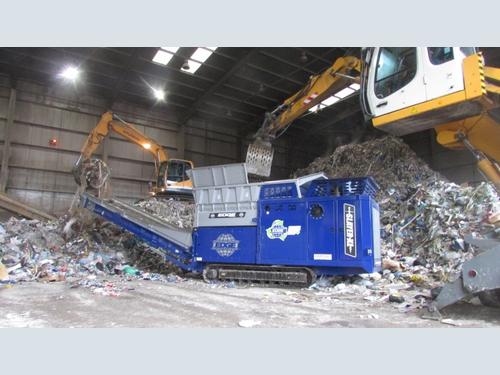 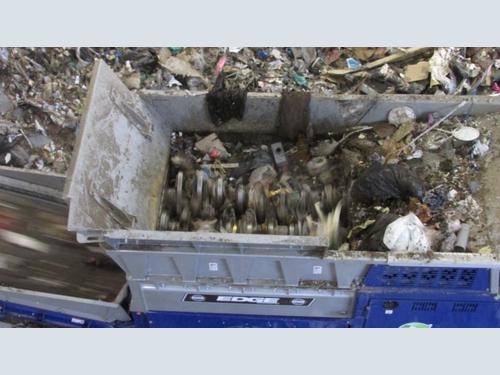 Over 20 years ago McKinstry Skip Hire were taking 90% of all the waste collected across Northern Ireland and putting it straight to landfill.  Today those figures have virtually been reversed, with over 92% of waste collected being recycled/reused and 6% used for Energy From Waste (EFW) and only 2% being sent on to landfill. A vital component contributing to McKinstry Skip Hire impressive recovery process has been the EDGE Slayer X.

Working on the front line for 5 years and processing a large percentage of the 155,000 tonnes of waste received annually by McKinstry’s Skip Hire, the Slayer X has been upgraded by the skip hire company with the recent purchase of an EDGE Slayer XL. McKinstry’s first EDGE Slayer X purchased in 2011 worked effortlessly for five years. Over the five years of operation from the EDGE Slayer, it has been projected that it had processed in an excess of half a million tonne of waste!

At McKinstry’s, over 90% of the waste is recovered using a manual pick team to attempt to recover commodities to an extremely high standard. The EDGE Slayer X had the ability to process a consistent piece size of 350-400mm which makes the throughput and the manual picking process much easier for the picking team at McKinstry’s MRF site. The site recover different grades of bottles HD and PET, different types of metals; ferrous and non-ferrous, along with different papers, fibres and films. McKinstry’s Site Supervisor Aaron Rianey states, “The EDGE Slayer has been very important to us over the past five years. It was known as our old faithful here! It made everything much easier and presented the waste to our manual pickers in a workable form.”

For McKinstry’s, the EDGE Slayer XL was at the top of the list, due to the exceptional performance of the Slayer X. A key factor for McKinstry’s choosing the Slayer XL was the anticipated performance and reliability that was evident with their previous unit.  The EDGE Slayer XL, twin shaft, slow speed shredder provides an additional 20% more throughput than the smaller Slayer X. “We are still going to get our piece size with the Slayer XL, along with far more throughput, which is exactly what we need!” I can programme the Slayer XL to work anywhere on site, doing many different aspects and still achieve maximum throughput!” The Slayer XL has been designed with a HMI Control Panel, which provides easy fine tuning for accurate application performance. A simple touch of a button and the EDGE Slayer XL is set-up to process wood waste, green waste or municipal skip waste, which is vital to busy site that accepts such a broad range of waste.

The EDGE Slayer chamber houses two, slow speed, high torque shredder shafts. Aaron explains, “One of the main things I like about the Slayer XL is, if something gets into the chamber or something the machine doesn’t want in the chamber, the machine will shut down, it will not shred on and cause a lot of damage!” The intelligent tramp metal cycle found within the Slayers operating system ensures against asset damage and large percentage downtime that can be associated to other shredder types.

After 5 years of operating the EDGE Slayer X, Aaron describes the aftersales customer support from EDGE Innovate; “the back up with the EDGE guys, is second to none. We are delighted with the service and support, we receive from them!” With EDGE Innovate’s design and manufacturing headquarters situated in Northern Ireland, EDGE are in the prime position to offer untouchable access to aftermarket and technical support to McKinstry’s MRF site.

Operating and Running costs is something every waste management company monitor, especially for the award winning McKinstry’s Skip Hire. The Slayer XL has relatively low fuel consumption of 25-30 Litres/per hour, compared to the majority of market rivals. The EDGE shredder also has a central auto-lube system which provides reliable protection against friction and wear. It also ensures the machine is attaining enough grease at all times. As well as this, the Slayer Range from EDGE has a reversible fan system to make sure the machine is also breathing. All of which ensure that the EDGE Slayer XL is the lowest maintenance cost shredder on the market!

Aaron describes the ease of performance with the EDGE Slayer XL, “With the majority of options wired into the PLC on the machine, the screen tells us everything we need to know! The only thing my man has to do in the mornings, is a simple check sheet and then it goes off to work!” It’s as simple as that!

With high application flexibility, proven reliability, consistent product piece size, coupled with low maintenance and operating costs; it looks like the decision to purchase a new EDGE Slayer XL was a no brainer for the folks at McKinstry’s Skip Hire.