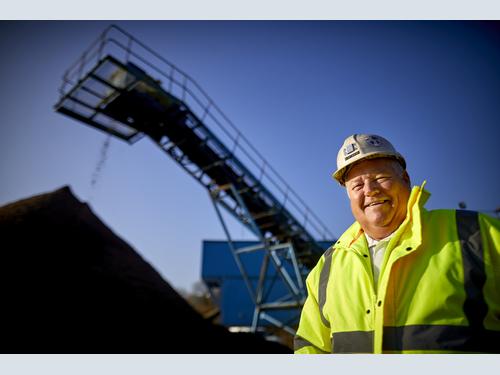 In October 1970, a 17-year-old Mike Broad, fresh out of education at Wigan Grammar School, secured his first job with local, family-owned quarrying business Gaskell Bros., based in Ashton-in-Makerfield.

It was to be the only company he would ever work for throughout his long and distinguished career and during this time he, alongside the Gaskell family, forged a successful relationship with wet processing equipment company CDE.

Mike retired from the industry and the Gaskell Bros. business in September 2018, a remarkable 48 years after accepting his introductory role within the company’s ranks – first, within the transport office; second, learning the ins-and-outs of quarrying, the company’s original focus; then sand extraction, and climbing up the ranks until being made a company director at the turn of the millennium.

In his years as a director, Mike worked alongside Managing Director, Mark Gaskell and the pair carved out a new path for the company. Venturing into the recycling sector in 1999, its primary focus was building and demolition waste from Manchester and the neighbouring counties.

“First, we began operations in dry recycling, procuring a licence to process material that was destined for landfill. Though, it did have its limitations,” Mike said. “We weren’t the only player in the market at the time, and this was a challenge. We had to identify and produce a product that others weren’t yet producing, so we ventured into wet screening – or ‘wet recycling’ – adding water to clean the recycled aggregate. This also presented challenges for us as it was taking up to three days, in some cases, to fully remove moisture content from drying sand.”

“It was a learning process and, evidently, not without its challenges,” Mike confessed.

This set the course for what was to become a long-running partnership between CDE and Gaskell Bros., leading to one of the first full-installation sand-washing and recycled aggregate systems in the UK.

“Enda [Ivanoff], was fresh out of university at the time we first made contact with CDE,” Mike explained. “He came over to see our operation and we explained the challenges we were facing; extracting moisture from the sand and excessive fines losses. Enda and the team at CDE implemented a sand plant that integrated seamlessly with our then current operation.”

CDE supplied its 40-tonne/h Compact Sands plant to Gaskell Bros. in 2002. Mike said, “The plant was a massive boost to our operation, significantly reducing our fines losses and expediting recycled sand aggregate dewatering.

“When we thought we had it all figured out other issues in our plant would start to surface. The log washer just wasn’t up to the job,” Mike professed.

“CDE told us they had log washers, so Mark and I booked our flights to come over and see the plant. That was a formative trip for us. We visited and reviewed several installations. We were so impressed by what we encountered on the trip that we began preparations to invest in a complete plant to be fully installed by CDE.”

The turnkey solution CDE supplied Gaskell Bros. in 2004/05, a complete overhaul of the company’s recycled aggregate system, was the single biggest investment ever made by the company.

Gaskell Bros. began processing reclaimed materials at a much faster rate. As little as 10 per cent of materials were now destined for landfill. “We were processing materials we didn’t before, and the built-for-purpose plant resulted in a significant upturn in new business contracts. Efficiency meant we had a volume of product to fulfil almost any customer contract,” Mike said.

With an improved product base, Gaskell Bros. carved a reputation for producing some of the highest-rated recycled aggregate in the UK.

“That same system installed by CDE still operates to this day. In all this time Gaskell Bros. has never had product rejected or returned,” Mike explained, proudly.

He added, “It was two-sided with Gaskell Bros. and CDE. We were on the ground every day, working, with experience in doing ‘it’, and CDE brought to the table a competitive edge and the technical know-how to make equipment work to suit our business needs.”

“From working with Mike and Gaskell Bros. to commission the first tailor made C&D wash plant in the UK to commissioning the world’s largest C&D waste recycling wet processing plant in Norway, CDE is supporting companies around the world to extract value from C&D waste material destined for landfill.

“Every day, CDE wet processing solutions divert 63,000 tonnes from landfill, totalling over 15 million tonnes per year. As this figure continues to grow, and as CDE continues to expand and innovate, Gaskell Bros. will remain one of our pioneering customers and an important part of that sustainability-driven growth story.

“We are extremely proud of the opportunity that Gaskell Bros. provided us in those early days and it took huge courage, on both sides, to believe in what was possible. We will continue to pioneer new innovative technologies so the world can continue to develop its circular economy.”