Premises of great importance for Doppstadt: 30 years of production in Calbe in Saxony-Anhalt 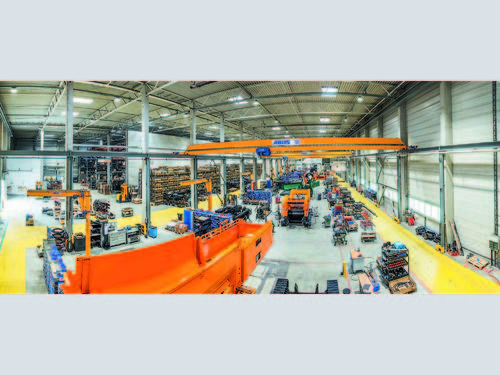 For more than 50 years, the Doppstadt Group has been among the leading manufacturers of processing solutions for the waste management and recycling industry in Germany. The approximately 450 employees at the Calbe site in Saxony-Anhalt play a significant role in this success. In September, the Calbe site turned 30 and Doppstadt will celebrate this big birthday of the 220000 m² premises in the Salzland district with all the employees on October 14. The company also looks forward to celebrate with dealers and customers in spring 2023...

METHOR comes from Calbe, INVENTHOR 6 and 9 too. Among the Doppstadt machines manufactured at the Saxony-Anhalt site, there are some bestsellers. The screens and the AK series are also manufactured there. The Calbe team produces 450 Doppstadt machines per year. 2024 it should be up to 600. In close cooperation with the team at the headquarters in Velbert, Westphalia, the employees of the development department in Calbe put all their know-how and expertise into innovative new Doppstadt machines. Employees from Velbert also support the sales and after-sales departments.

Thirty years ago, when Doppstadt took over the former VEB (publicly owned company) Förderanlagen Calbe, nobody would have thought that it would develop into one of the largest production sites for recycling machines in Germany. Production Supervisor Reimund Hoffmann remembers the time of the takeover: “The factory had great potential. The employees were highly motivated and they had profound expert knowledge in plant engineering”.

Construction of the first Doppstadt machine in 1995

At that time, Doppstadt started with 190 employees at the new production site. Today 450 employees of the company work in Calbe – out of a total of 700 in the group. During the first three years Doppstadt focussed on the production of conveying machinery in Calbe. Then, in 1995 the first milestone: the construction of the first Doppstadt machine, DW 3080, also known as “Mammut“. This machine, developed under the direction of Josef Doppstadt was successful on the market for 25 years. The same year the company changed its name to Doppstadt Calbe GmbH.

In 2018 another milestone: The Calbe team developed the INVENTHOR series, which is in great demand to this day. “It was a completely new development, which posed enormous challenges,“ says Reimund Hoffmann. In 2013, Doppstadt started building a new 10000 m³ assembly and logistics centre, which was completed in 2016. Furthermore, 6 production halls were renovated and expanded. Investments in a combined heat and power plant, LED lights, a waste heat recovery plant and the switch to (partially) electric vehicles make the Calbe premises a model in terms of sustainability. Digitalization determines the production processes: Welding robots, laser cutters and 3D milling machines are used.

For the future, the Doppstadt Group aims at a considerable growth at the Calbe site. For 2022, they expect a further increase in turnover to over 200 million euros. Before the end of the year (2022), a second assembly line is supposed to be completed. Furthermore, the efficiency of the production procedures is controlled and optimized again and again. „We want to grow, of course,“ Managing Director Michael Simon describes the direction to be taken.