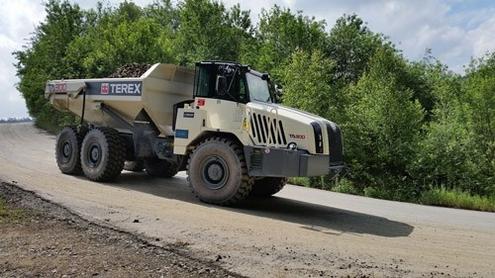 Skene Group Construction Services Ltd, a leading independent operator within the construction supply sector, has drawn on seven years of success using a Bell Equipment B30D, and has further invested in an evolved B30E ADT.

The new-breed machine was brought into the fleet within one of Skene’s quarry sites in September, working alongside the company’s existing B30D, which continues to deliver.
Skene Group, a company based in Fife which originated in 1968, is a major supplier to the construction industry, manufacturing and supplying concrete blocks, ready-mix concrete and aggregates throughout Scotland and beyond. The company’s own plant and equipment are utilised within its two quarries and Contract Division, carrying out civil engineering works within both private and commercial sectors.

“The machines we choose for working within the quarries are certainly put through their paces,” says Skene’s Joint Managing Director, Darren Forrester. “We use the ADTs daily, primarily to perform overburden tasks to access rock, but also to shift and retrieve material from the quarries’ main faces for subsequent processing at our static plants.

“The use of capable ADTs has been essential in achieving these tasks effectively, and we’ve tried and tested the benefits of various makes and models over the years. We bought our first Bell ADT seven years ago, and have been truly impressed with the machine’s reliability and performance, right to the present day.”

That machine is still ‘very much up and running’ and has an impressive 7,000 hours under its belt. Its robust performance has been a key contributor in forming Darren’s decision to invest in another Bell. However, during the time Skene’s B30D has been grafting in the quarry, the leading ADT manufacturer has been further developing the capabilities future machines, and has presented a new and improved line of vehicles to the market – the E-series.

Development of the E-series took the course of five years, and led machines to be stringently tested within some of the harshest mine sites in the world. With increased suspension travel and an A-frame adaptation to give operators a more independent ride, E-series vehicles have already proved a ‘driver success’. The series offers 6x6-technology to provide class leading power and weight-ratios together with advanced engine and drivetrain characteristics, while the improvements made to the onboard diagnostics enable the interface to be more detailed, but also user friendly.

“From experience, we can see why Bell Equipment's D-series platform was so well regarded by the industry throughout its lifetime, so by carrying its successful platform through to the smaller trucks in the new E-series range and by changing the front suspension to an A-frame layout, there’s a formula in place for another winning succession of machines.

“In short, we’ve been really impressed with the new B30E ADT. It’s a cracking machine that we’ve used every day since delivery, without a hitch.

“The machine type has, like our own relationship with Bell Equipment, evolved over the years, and grown from strength to strength.

“As a company, we’re proud of the strong position we’ve created for ourselves within the national construction industry, and have always strived to find ways to continually commit to moving our business forward, and facilitating success for our clients, locally and nationally.

“This latest investment in an evolved machine and its potential to deliver, chimes perfectly with that valued Skene approach.”