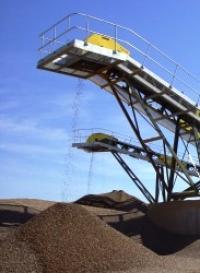 Despite a slight improvement in 2010, UK aggregates production is at its lowest level in nearly 50 years. Last year, production was around 160 million tonnes, a figure not seen since before 1965. As a result of the recession, around 70 pits and quarries have closed over the last year.

These are some of the conclusions of the annual BDS Marketing Research Ltd report entitled: 'Estimated outputs of pits, quarries and marine wharves in Great Britain'. This shows company market shares at a local, regional and national basis. As well as market shares, the report lists sites that have opened or closed and changes in company ownership. It also includes an independent three year forecast for the industry. The survey is used by existing companies to compare their market share with their competitors, equipment suppliers and others considering investment in the industry.

Tarmac has maintained its position as the leading aggregates producer in Great Britain although it is thought to have recently lost some slight market share. BDS estimates the Tarmac national share at around 20%. The top five companies are completed by Aggregate Industries, Hanson, Cemex and Lafarge. Together, the consultancy estimates that these companies represent around 70% of production.

Despite the recession, only three companies have gone into liquidation, and two have been subsequently acquired from administrators. There continues to be industry restructure. Hanson has exited the aggregates market in Scotland, whilst BDS has identified six other industry acquisitions over the past year. Some companies have shown their confidence in the future, over 20 sites have opened or re-opened in the past year.

Despite some slight recovery in 2010, when demand picked up by 2%, BDS is not optimistic that further recovery is imminent in the short term. Whilst the private sector is expected to show some improvement from recent low levels, the recovery is expected to be weak. The recent improvement in house building has already stalled. In the public sector, expenditure cuts have been well documented. These will take time to work through into lower demand for construction materials. However, BDS is forecasting that the decline in public sector work will more than offset any recovery in private sector demand. Whilst the consultancy is forecasting a decline in the market in both 2011 and 2012, by the following year it is expecting relatively strong growth. By this time, BDS believes that the cut backs in public sector work will have worked through the system, while growth will be stronger in the private sector.