Robson Ships to the South Atlantic 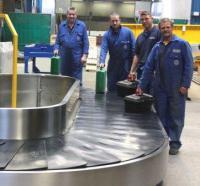 Robson has just completed one of the smallest Baggage Reclaim Carousels they have ever manufactured. At just a12 metre perimeter the carousel could easily fit in your own living room.

St Helena lies 703 miles from Ascension Island, which was the staging post during the 1982 Falklands Conflict, a massive 4700 miles from the UK.

Robson’s Airport Systems Design Engineer Ian Blanchard stated, “the St Helena Carousel is half brushed stainless steel and half galvanised steel, it will sit half inside the terminal and half outside for the baggage handlers to load with the passenger luggage. The carousel will be packed and despatched for its four-week journey within the first weeks of November.

Even with such a small system the Robson high standards of build quality, high performance and robust reliability were applied.

The carousel will be transported to Cape Town South Africa by cargo ship and then onward to St Helena by RMS St Helena one of only two surviving ocean going vessels to carry the title Royal Mail Ship.