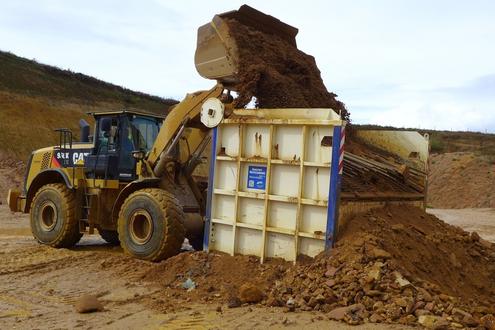 The simple and robust screen technology of the BHS is also becoming more widespread in the extraction segment. "Slowly, the market has understood that we do not sell a toy - but technology from practice for practice", reports Florian Schmellenkamp, Head of Business Development at BHS.

Since the end of May 2017, an SBR 2 has been in operation for the screening of more than 1,000 tonnes of raw gravel daily in the gravel plant Werschau, Germany. This pre-screening protects the stationary system against larger stones, which have previously regularly forced the production company to interruptions. Jens Ketter, plant manager of the gravel plant, had to complain about production losses due to damage in the turbo washer and bucket lifter. After three months of production with the SBR 2, he and his team are able to make the biggest compliment to BHS: "The SBR 2 was the best investment in 2017!"

Thus, the production process was extended by one step with the pre-screening. Before the task in the stationary plant, the raw gravel is loaded with a CAT 966, the fine portion is taken up in reverse and then placed in the stationary plant. The sensor operation of the electrically operated SBR 2 keeps the operating costs of the sieving at an extremely low level of <0.25 € / 100 t. With an hourly output, including the travel distances, of approx. 150 t, the SBR 2 offers enough capacity to maintain the production process at full capacity - without production downtime.