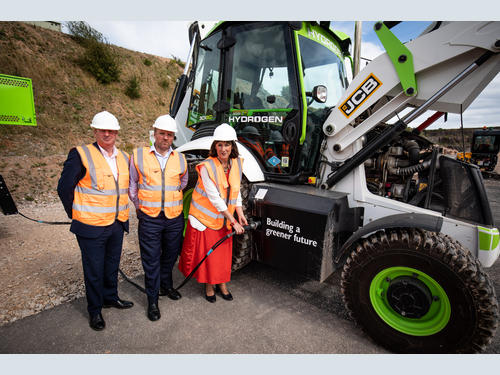 Shadow Chancellor Rachel Reeves has been given a detailed insight into JCB’s £100 million investment in super-efficient hydrogen engines.

The development of the hi-tech hydrogen combustion engine is being undertaken by a team of more than 100 engineers at JCB Power Systems in Foston, Derbyshire.

The Leeds West Labour MP toured the engine plant, where she was shown the production area and detailed testing processes involved in developing the engine. Accompanied by Gary Smith, the General Secretary of the GMB Union, she later watched a demonstration of a prototype backhoe loader powered by a hydrogen combustion engine. She then tried her hand at the quick and simple task of refuelling the machine with hydrogen.

Rachel Reeves said: “It was fantastic to see JCB’s zero emission machinery during my visit. I saw first-hand how hydrogen combustion engines can play an important role in decarbonising the construction industry and agriculture. It's clear that zero carbon technologies are the way forward for Britain.”

JCB Chairman Lord Bamford said: “It was a pleasure to show the Shadow Chancellor the great strides our British engineers are taking in developing a solution to power our machines in the future. They need to be powered by something other than fossil fuels in the years to come and super-efficient, affordable, high-tech hydrogen engines with zero emissions can be brought to market quickly using our existing supply base.”

JCB’s emergence as a leader in zero-emission hydrogen technology comes as governments around the world unveil strategies to develop the infrastructure needed to support the use of hydrogen to drive down CO2 emissions. JCB has manufactured engines since 2004, producing them at plants in Derbyshire and in Delhi, India. Last year JCB celebrated a major milestone: the production of its 750,000th engine.