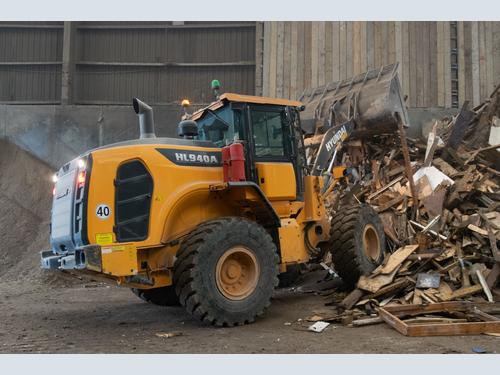 Hyundai Construction Europe recently dropped by Reston Waste Management in South West London to congratulate the waste recycling firm on celebrating its 20th Anniversary this year and also to take a first look at the company’s latest HL940A wheel loader in action.

Due to the large volume of waste processing, where up to 75,000 tonnes of construction and demolition (C&D) waste is processed and recycled annually, the company needed a machine that could meet the toughest expectations of the plant operators and deliver the highest level of performance – the HL940A exceeded expectations and more…

Josh said, “We have had machines from other manufacturers but since moving to Hyundai we find the brand to be robust and a very reliable machine, with little or no down time – which is what you need in the waste environment.  The machines work long hours with two shifts per day – so there’s no time for an unpredictable machine.”

The new HL940A Hyundai is powered by a stage V Cummins engine and delivers substantial performance gains. The machine comes equipped with an integrated onboard auto weighing system, accurate to within plus or minus 1%.  It also benefits from improved accessibility to the sealed engine room with a tilt-back hood which allows for easy cleaning and maintenance. The engine compartment was designed to prevent any possibility of fire due to contamination which is perfect for operating in a waste environment.

Reston Waste Management’s new HL409A machine was ordered with extra features to cope with the harsh conditions of a waste recycling facility – these include – bolt-on demolition cab guards and front light and suppression guarding manufactured by Guard Engineering.  A Fireward Automatic Dual-Agent Fire Suppression System was also specified. Another added safety feature is the AAVM camera which allows a full 360 view of outside the cab, which is essential when working in a potentially hazardous environment.