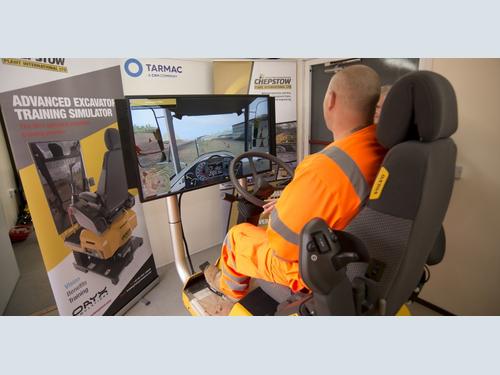 Leading contractor Chepstow Plant International, like many contractors, takes health and safety very seriously. They have increased their focus on ADT safety and operator training to ensure that their quarry operatives are maintaining the best possible levels of safe working practice on site.

Their Volvo Excavator Simulator training service is now also being offered to other contractors and quarry businesses.

John Corcoran, managing director of Chepstow explains, “The ADT has become the vehicle of choice given its scope and capabilities - they’ve been used in a variety of applications over the years with a design that ensures the safety of the operator should anything go awry. But with increased ADT use, a new set of challenges to quarrying has arisen. We’ve analysed some of these by working alongside our quarry customers to find solutions, such as reviewing operating procedures to provide optimum terrain conditions for ADTs to work on, having trucks equipped with extra safety technology, supported by state-of-the-art operator training for ADT drivers.”

Among an extensive fleet of plant, in which the majority of excavating machines weigh in at 30-80 tonnes, Chepstow also operates a large number of articulated dump trucks. The company added 73 Volvo ADTs to their fleet in the past year alone.

Having that many machines requires large numbers of highly skilled operators - all whom must be familiar with the latest equipment and capable of working in a safe, productive manner on site. The majority of the company’s work is in quarrying, so Chepstow routinely qualifies its operators to Mineral Products Qualifications Council (MPQC) Plant Operator Competency Scheme levels.

In line with Chepstow’s initiative, excavator operators have to prepare level-loading areas, dozer operators must keep level tips and stockpiles, and methodology and geotechnical assessments now have to be detailed to support the developments with new ADT stability programme. The company also keeps an ADT Risk Register and changed its operating procedures. Every site where ADTs are going to be used is visited by Safety and Quality Manager, Steve Smith who says, “We thoroughly assess weather conditions, unstable or uneven ground levels, the plant being operated, pre-start daily inspections, tyres, haul roads, inclines and downhill haul sections, plus loading and tipping areas, and reinspect again a few days after work has started. For us, safety always comes before production.”

In addition, one of Chepstow’s client partners, Tarmac, recently worked alongside them to develop an inclinometer that allows for an even greater safety margin during ADT operations, providing improved preventative controls to stop the rear chassis of an ADT from turning over in the kind of extreme terrain conditions that quarrying, by its very nature, is susceptible to.

Steve says, “It compensates for any ‘overly enthusiastic’ handling that quarrying operatives may engage in. We all know that in severe conditions, the rear chassis of an ADT can roll over leaving the cab safely upright, safeguarding the operator, but we would much rather there was never a situation where it risks being done at all! Now, if the body of a truck tilts more than 9 degrees either left or right, the system will automatically alert the operator and stop the tipping hydraulics. Likewise, if the body is down, the operator will be warned if the rear section of the chassis exceeds 12 degrees of roll angle during travel.”

Of course, both of these angles are well within Volvo’s own stability parameters but Steve says, “We’ve actually gone for around one third of the angle that Volvo recommends, to give us an even smaller window, which should eliminate quarry trucks getting anywhere near those parameters. The training and familiarisation programmes we have rolled out focus us primarily on the behavioural approach for operation and supervision of ADT operations in line with the technical improvements we have developed.”

State-of-the-Art Simulator Training
The company has also been operating a complex Oryx Volvo Excavator Simulator for the past two years, training excavator operators before allowing them in the cab of actual machines, and has over the last 8 months purchased a second simulator for training for ADT and wheeled loader development. This is with a view to developing top calibre operators, not only to perform with optimum competency, but to have an understanding of the true purpose and capability of the ADT through the increased awareness and specific training.

The simulators provide a dual function - a unit has fold-down armrests that have Volvo wheeled loader controls in place, so it can be used for both loading shovels and articulated dumpers. It uses actual operating site data to deliver an incredibly realistic driving experience with the entire unit tilting up to 23 degrees forwards or backwards, and up to 15 degrees to either side, meaning a seatbelt is necessary to remain in the seat.

Training exercises become increasingly difficult and longer in duration, teaching operators how to use engine and transmission braking and training them in vehicle manoeuvres, loading, hauling and production scenarios. The simulator even records how much fuel is being used, to allow drivers to see that their right foot has a direct effect on the running cost of the machine.

Chepstow has been testing the ADT simulators at Tarmac’s Mountsorrel Quarry in Leicestershire. The first trainee to prove the effectiveness of the machine was Jason Rust, an experienced construction site operative but a machine novice. Having undergone training on the simulator, Jason has now passed his MPQC assessment and graduated to operating a Volvo ADT at the quarry. Jason says, “When I first got in, it was all new, but after just a few days I felt that I’d got my head around it, and it was a lot less worrying than getting straight into a truck.”

The simulators make life easier for trainee, and for trainer. There is a buddy seat in an ADT, unlike an excavator where the instructor has to stand clear of the machine while in radio contact with the trainee. National Training Manager, Martin Stephens adds, “The beauty of a simulator is that if anything does go wrong, it’s simply a case of pressing restart, which cannot be done in a live site situation. It only takes around 5 – 7 days to get to a point where significant risk can be managed.” This is risk free training for both accredited and novice personnel.

John Corcoran sums up, “There are clear safety and cost benefits to having this state-of-the-art technology and it’s an investment that Chepstow feels is worth making to ensure risk-free, specialised training. This high level of expertise will not be limited to Chepstow’s own operators either as the company is able to offer a complete operator training service to other contractors and quarry businesses. Our aim is to inspire a change in mindset to the way ADT stability is viewed and managed.”

Since the refreshed focus in 2015 on ADT stability and the support provided by CPI clients partners there has been an unimaginable improvement in both stability control along with mindsets and behaviour with all staff involved in our operations.