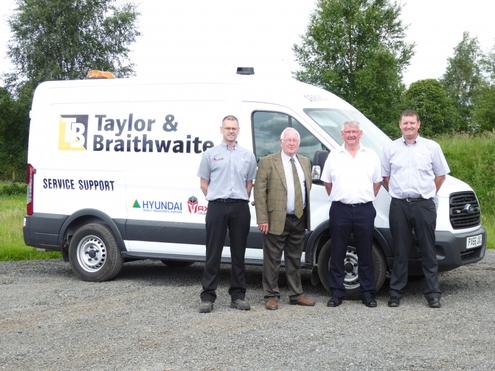 Originally started by Harold Taylor in October 1967, Trevor Braithwaite joined soon after and T&B was born.

Dealing with early brands like Kuhn and Universal Tractors and then JF Forage Harvesters and PZ; T&B began talks with John Deere in 1992 which resulted in a franchise deal a year later. Further expansion followed in 1992 with investment in new premises at Sandford. This introduced more efficiency and enabled them to demonstrate new machinery.

Hyundai Construction Equipment:
The company remained almost 100% focused on agricultural machinery until director, Ian Burton joined the company in 2005 and took over the sales side of the business with Paul Taylor, responsible for aftersales.

One of Ian’s first moves in 2009 was to contact Hyundai with a view to a dealership, despite the country in recession he saw this as a good long-term move.

Ian, commented, “Not many were interested at this point in selling excavators, but I saw it as a great opportunity to enter into this industry whilst it was still quiet, and be well prepared for when the market recovered. The reason we chose Hyundai as a brand was because they manufactured a comprehensive range of machinery which included both heavy-line machines alongside the midi and mini ranges. They didn’t have any dealer representation in the area that we covered, so it made commercial sense to both companies.”

In September 2009 Ian met the Hyundai team in Belgium to discuss a Hyundai dealership which was successful. T&B then began trading in January 2010 with the Hyundai -7A machines, and from this point on the business grew.

The following year T&B gave up their John Deere franchise as they couldn’t agree the changes in the dealer agreement for their area. Since then however the company has further developed its OEM portfolio and is now the approved dealer for leading brands including Maximus, Pronar, Wacker Neuson (small plant), ProDem, Stihl and Yamaha and the latest addition – Rubble Master.
Today the company’s business is more than 95% dedicated to construction machinery.

50th Anniversary Charity Ball
As part of Taylor & Braithwaite’s 50th anniversary celebrations the company will host a ‘50th Anniversary Charity Celebration Ball’ on the 6th October 2017 at the prestigious Low Wood Bay Resort & Spa, located on Lake Windermere. 240 guests will attend this event, which will include an ‘Auction of Promises’ and a prize draw. The company aim to raise in excess of £25K with all funds going to Cancer Research UK.

Ian, commented, “Cancer Research UK is a very appropriate charity to choose as unfortunately we have all been affected by this disease, either directly or indirectly so we delighted we are able to host a ball to raise funds as we celebrate our 50th anniversary.”