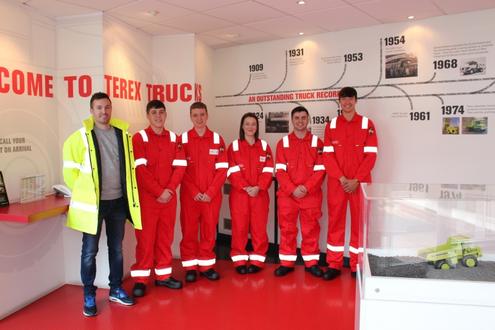 Based in the company’s global HQ in Motherwell and covering a wide range of disciplines, the apprenticeship provides hands-on experience and a range of qualifications including Scottish Vocational Qualifications (SVQs) and National Certificates (NCs) as well as the opportunity to progress to further education on completion.

Joining the team are: Paul Croal and Michael Morris, who will specialise in Fabrication; Lauren Wright and Scott Livingstone, who are apprentices in the Product Testing department; and Ross Mitchell, a Quality apprentice.

The sixth apprentice, Keith Magilton, has worked with the company in its Stores department since 2008 but has now moved into an adult apprentice role in the Purchasing department.

As part of their induction programme, the new apprentices have been spending time getting to know the business through presentations from the various departments and the management team as well as test-driving the trucks on the company’s impressive on-site track.

The induction process was rounded off with a team-building event which brought together all apprentices (recently time-served plus new team members) to establish links before they head to training provider EKGTA in East Kilbride until the end of May 2018. Adult apprentice Keith Magilton will complete his training with Training Matters but remain based at Terex Trucks.

Terex Trucks’ HR business partner, Yvonne Whitelock, said: “We had an extremely high calibre of applicants this year and I am confident that the six individuals we recruited will make an excellent addition to our team.

“We are proud to offer our renowned Terex Trucks modern apprenticeship scheme that offers apprentices practical experience in a number of disciplines whilst gaining academic qualifications such as SVQs and NQs and earning money.

“Impressively, several of our new recruits have previously achieved HNC qualifications so we plan to develop tailored training plans to upskill them even further.”

The new recruits have joined the 18 Terex Trucks apprentices currently enrolled on the scheme, which takes approximately four years to complete. During that time each apprentice will have a dedicated mentor and work alongside expert engineers, technicians and experienced team members.