The new dimension in payload management 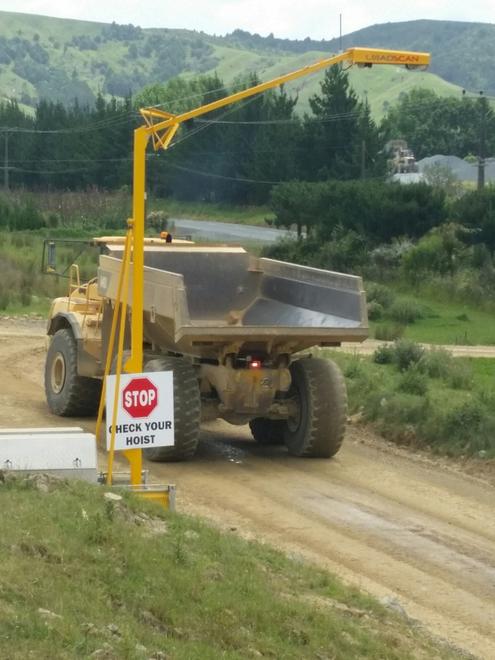 Exhibiting for the first time this year at Steinexpo is Kiwi based company Loadscan, showcasing the newest technology in payload management.

The Loadscan Load Volume Scanner (LVS) system is based on laser scanning technology combined with software that creates 3D model images of trucks to measure the exact volume of the material loaded in a truck or trailer bin.

Loadscan will be exhibiting its LVS-3TMM with extended outrigger for measuring up to 50T articulated dumpers and underground mining trucks and the LoadTrak in-cab console for automated load data logging.

The LVS by Loadscan was the first in the world to gain Trade Approval for volumetric measurement of material loaded into open bodied bins and now boasts Trade Approval in two countries (New Zealand and Australia).

Since initial development the LVS format has been extended to include portable, semi-portable and fixed gantry models. The range of measurable load materials and truck types has been extended. LVS devices are successfully operated on a full spectrum of truck and trailer designs including on-road truck and trailer units, semi-trailers and centre-dumpers, as well as off-road articulated dumpers and quarry trucks.

The range finder lasers used in the LVS system are of the highest quality on the market and are the only lasers available that pass the stringent metrological and accuracy testing required for Trade Approval.

Cutting edge volume scanning solutions
The LVS-3TMM is a fully self-contained mobile truck measurement unit that can be driven to a site and be fully setup and operational in as little as 45 minutes. There are a range of power options, plus the ability to transmit truck measurement load reports via Wi-Fi, Cellular Modem or Network cable. Loadscan is the inventor and first to launch the mobile truck measurement unit into the global market place which has made it possible to measure and monitor loads in temporary locations that were previously going unmeasured.

Some of the key aspects and functionality of the LVS include:

A custom solution tailored to your site requirements
Tracking truck-loads of valuable material around your mine site can be a nightmare of paperwork or complicated and expensive dispatch systems. LoadTrak, rugged in-cab consoles, are a customisable, value-adding, remote data entry and feedback option for your LoadScan LVS that can replace paper (Plods) load records without over-complicating things.

Rugged mining-proof touchscreen consoles with built-in wireless (WiFi) connectivity allow truck drivers to enter load details such as load source, load type, destination and so on at the time of loading. When loaded trucks come within WiFi range of the LVS system the load details are automatically uploaded and recorded along with the load measurements. All load details are available for analysis and reporting with Loadscan’s Overview load management software and can be easily integrated into in-house management software. The measurement result is also displayed immediately on the LoadTrak console for the drivers information. 3D images of every load can be viewed and analysed on the Overview reporting software allowing for loader operator training to ensure maximum load opportunity with the minimum of haul cycles.

The LVS was used to assist them to accurately measure the removal of 150,000m3 of overburden.

Edward’s Plant Hire was contracted to remove the overburden from the quarry and relocate this off site using 40T Articulated Dumpers.

It was past discrepancies between surveyed quantities and actual payload volumes that sparked both parties’ interest and agreement to use the LVS technology.

RFID for Automatic Truck Identification
With the LVS system being a totally automated measurement system using laser range finders and Tagmaster RFID tags for automatic truck identification, the trucks simply drive under the LVS scan head to obtain an accurate load measurement complete with a time and date stamp for each load.

The trucks were measured out with full loads and measured again on return to account for the haul back material that was stuck in the trays.

The haul back quantity was removed from the outbound load total and equated to 9987m3, 5.7% of the total volume measured.

Now the LVS system is their primary payload measurement solution and both parties recommend it, stating that it is “easy to set up, easy to use and it’s accurate and honest!” “Alleviating any disagreements around payload volumes”. A big plus for both businesses.

“The truck drivers are also on board, it tells them exactly what they need to do and when or if there are any issues”.

Improved Efficiency
Not only has the LVS system improved efficiency of the whole operation, removing any necessity for interim surveys and allowing the project to flow more smoothly but it has also been beneficial for management’s reporting requirements. The LVS provides up to the minute load details at the touch of a button and monthly reports of m3 moved can be used to reconcile payments to the contractor. The Load Volume Scanner also assists with complying with health and safety requirements, providing the ability to track truck start times and hours on site, all of which has led to the saving of a lot of valuable time and money.

See us at Steinexpo - Stand 59