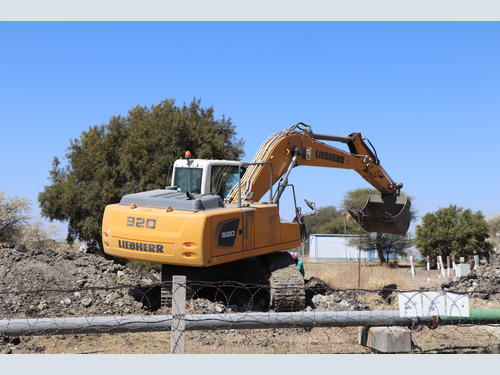 KEDASE, based in Boshoek, South Africa and active in mining, purchased three R 920 crawler excavators from Liebherr in 2016. The compact dimensions of the machines and their fuel efficiency were key factors in the decision-making process. And after more than 1,000 operating hours, these criteria still hold true.

The three Liebherr R 920 crawler excavators are used for trenching, pipe laying and for the feeding of a screener in a chromium mine. With an operating weight of 21 tonnes and equipped with a Stage IIIA / Tier 3 / CHINA III engine with an output of 110 kW / 150 HP, the R 920 crawler excavator was developed specifically for these types of applications. For KEDASE, the machines have been configured with a 5.7 m boom, a 2 m stick and a 1.15 m3 bucket.

Performance meets expectations
Since their arrival in 2016, the R 920 crawler excavators have met all expectations. After more than 1,000 operating hours, these machines are currently used for 9 to 12 hours every day with an average fuel consumption of only 15 litres/hour. The manoeuvrability and hydraulic performance in particular make the machines efficient on site.  From the operator's point of view, the R 920 is characterised by its speed, comfort, stability and performance: ‘I feel like I'm in a pickup’, said the operator with pride.

For Ofentse Sekano, KEDASE’s Managing Director, the partnership with Liebherr is certainly on the right track. With the expectation that these machines will keep performing over time and reach 15,000 operating hours, he will certainly be choosing Liebherr again in the future.