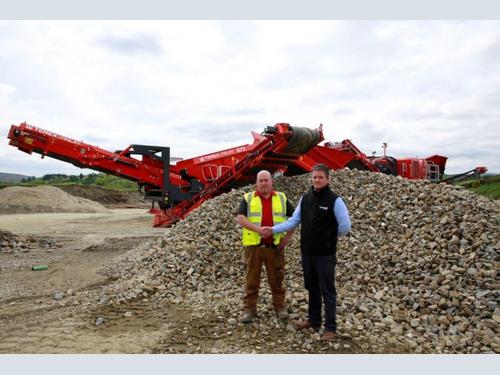 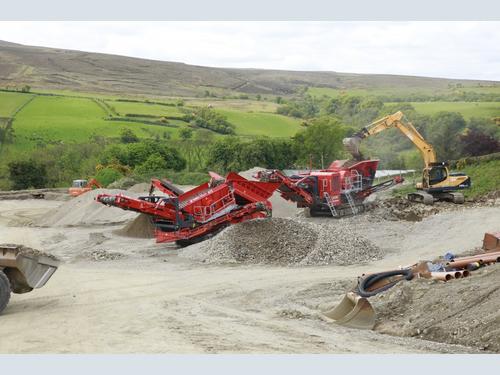 The village of Claudy near Derry City, was originally named from the Irish “Cloidigh” meaning washing river, most likely referring to the fast flowing Faughan River. This is the location of TJC Sand and Gravel’s pit and the place where Trevor Mulhern started his business in 2010, when washing sand and gravel and building a business during one of the biggest recessions on record took considerable vision and determination.

This poor economic outlook did not deter Trevor whose lifetime goal was to run his own business. After several years’ of working in the extractive industry that’s exactly what he did and TJC Sand and Gravel was born. The company supplies high quality sand, gravel, topsoil and decorative stone products to a broad and geographically diverse range of customers. The unique properties of the material from TJC’s extensive deposits make the finished products highly regarded among some of the largest concrete product manufacturers in Ireland. Through continued investment in new equipment and innovative product designs, TJC have carved out a strong name in the sector and have ambitious plans for the future development of the business.

Today with a dedicated workforce and a growing customer base on both sides of the border TJC are going from strength to strength. That growing strength was validated by an increase in demand and a requirement to invest in new equipment to keep up with production requirements. When making such a significant investment, TJC considered various suppliers of machines on the market and decided to go with a Terex Finlay J1170 Jaw Crusher and Terex Finlay 873 Screener supplied by Ormonde Machinery. Terex Finlay have a strong name in the manufacture of mobile crushing, screening, washing and recycling equipment having experienced multi-million pound investments in innovative new products by its parent company Terex over the past number of years. This has led it to becoming a much regarded brand both locally and globally with a well-established and rapidly expanding dealer network internationally. For Trevor the key word was versatility and the versatility provided by these two machines meant financial savings for his company. Both machines have performed well and exceeded expectations from the outset with notable increases in production output and quality of the finished products.

Trevor Mulhern commented: “With the ability to change the CSS at the press of a button and the speed of the Crusher in seconds, this makes the machine very versatile when different product specifications are required. The versatility of the Finlay 873 Screen also allows for many applications, from screening at the face, before or after the jaw or cone crushers, and the ability to screen top soil, have reduced the need for several different screens to facilitate my operations.”

Notable options include a variable speed pan feeder along with an independent prescreen system. The J-1170’s 48.8 tonne / 107,585lbs transport weight and compact dimensions mean lower transport costs between and within crushing sites.

The Terex Finlay 873 Scalping Screen is ideally suited to working in aggregates, sand and gravel, top soil, construction demolition and recycling applications. This highly versatile machine can be fed either by a tracked mobile crusher, shovel or an excavator and has the capacity to process at a rate of up to 450 Tonnes per hour.

For any company making a capital investment decision is significant, and choosing the right partner is a key consideration. For Trevor Mulhern keeping production levels maximised and mitigating any down time was a key consideration “I chose Ormonde Machinery and the Finlay products due to the proximity of the manufacturing base, and good relationship I have built up with Ormonde in the past two years. For us after sales service and the ability to respond quickly was a paramount consideration”