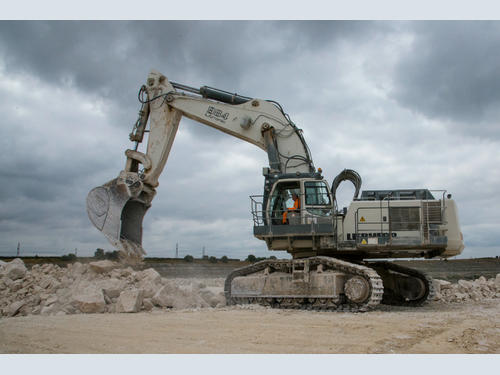 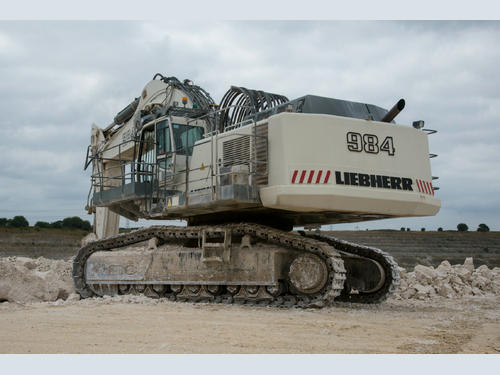 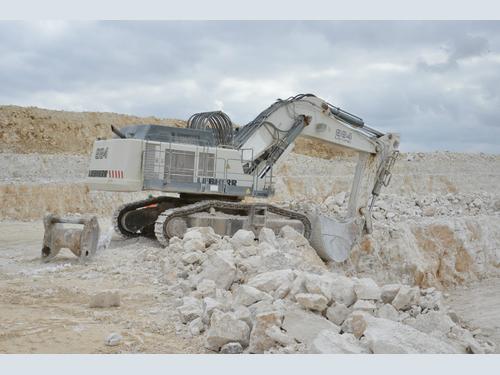 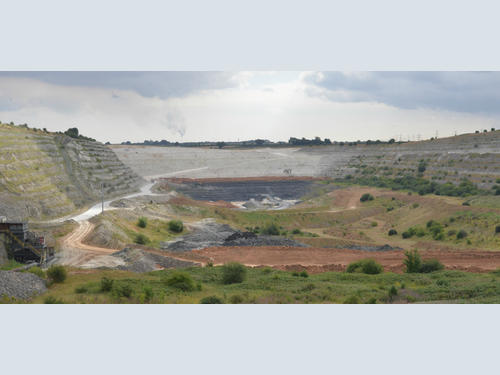 Over the last decade, the use of large excavators in quarries has declined. Fewer than a handful of UK quarries are now using 150 tonne plus machines for extraction works with many opting for navvies around the 80 - 120 tonne mark. But across the Humber Estuary there is a quarry using a pair of large Liebherr excavators on full-time extraction work.

The machines in question are still going strong in the quarry where they first went to work more than ten years ago. Operated by one of the UK’s most respected names in earthmoving, Alf Kitching Ltd, the two Liebherr R 984 C excavators continue to keep up with the demands of a modern-day quarrying operation. Despite clocking up a combined 34,065 hours they still appear to be in excellent shape considering the tough environment.

Since day one, the two machines have been excavating chalk in the South Ferriby Quarry, which supplies the cement plant on the same site. The R 984 Cs have to achieve this without the assistance of blasting to guarantee the driest possible material for the cement kilns and because there are properties nearby: they rely solely on their immense breakout force to get the job done.

Launched almost 30 years ago, the R 984 C has proved to be one of the best sellers for Liebherr with over 1100 units sold worldwide. Weighing approximately 120 tonnes in this particular mass excavation specification, Alf Kitching’s two R 984 Cs are still producing the quantities required by the cement plant thanks to the excellent aftersales support and parts availability currently in place.

The excavators are powered by a Cummins 18.9 litre, six-cylinder engine that can deliver 675 HP. ‘Liebherr has been extremely good with supporting the engines,’ Managing Director Paul Kitching explained. ‘We have suffered with occasional reliability issues but the service response from them has been first class.’ Overall, the reliability of both machines has impressed their owner and the quarry management: ‘Apart from the usual servicing requirements, the machines have given us exactly what we have asked of them,’ Paul said. ‘We have undertaken some remedial works to address small cracks to the booms on both machines but this is down to the work they are expected to undertake. We have been extremely pleased with them both and with the support we get from Liebherr themselves.’

The R 984 Cs cabin is well laid out and a comfortable place to work and the Liebherr Litronic engine management system provides the excavators with four power settings from LIFT and FINE to ECO and POWER. Alf Kitching’s two R 984 Cs are mostly operated in POWER mode due to the nature of the material being extracted.

One of the machines is equipped with a Liebherr quick coupler and ripper tooth attachment to loosen some of the harder seams found at the quarry. And as the hardness of the material being excavated varies across the site, the two machines are regularly moved around with the ripper-equipped machine tackling the tougher, more stubborn areas of chalk.

Immense force is exerted through the machine when digging and ripping the virgin material and both excavators remain firmly planted to the quarry floor thanks to the heavy-duty undercarriage. The mass excavation equipment gives the Liebherr a maximum reach of almost 14 m at ground level and a potential dig depth of up to 8 m, which is ideal for maintaining the bench heights at the quarry.

The 5.5 m3 buckets were specially designed following a visit to site from the technical team from Liebherr’s excavator manufacturing facility in Colmar, France, to ensure that they gave maximum durability and breakout force.