Volvo A60H pulls out all the stops for CEMEX UK 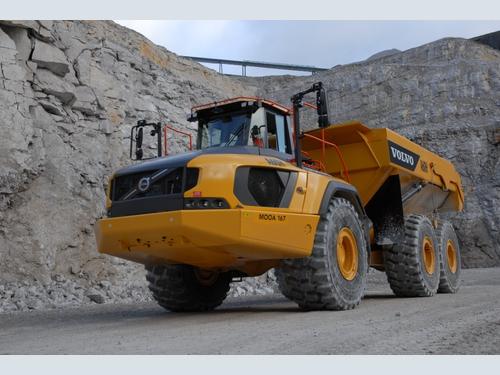 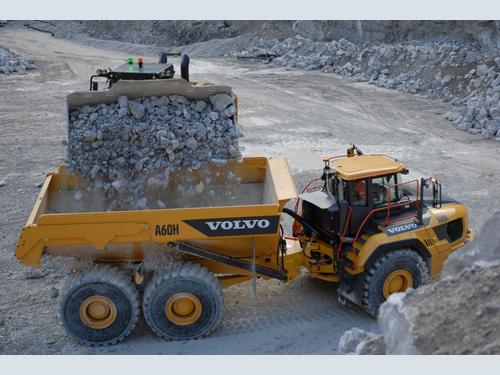 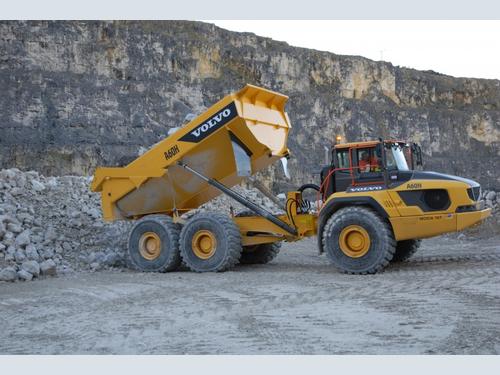 The very first Volvo A60H articulated hauler to be sold in Great Britain was delivered to CEMEX UK during November last year and has been pulling out all the stops at the company’s Halkyn Quarry, Calderdale, Flintshire.

Previewed for the first time at Hillhead 2016, the 55 tonne capacity hauler was trialed earlier last year by CEMEX UK to assess the suitability of introducing an articulated hauler of this size to the operations at Halkyn and proved to be a success in all areas of the quarry’s production.

Specifically for CEMEX UK the A60H has had additional features fitted to it including an Ardent fire suppression system, Groeneveld automatic greasing and 200mm side extensions coupled to a cantilever tailgate increasing the hauler’s body capacity to 39m³. Thus configured the truck is capable of handling all of the hauling duties on site which include hauling blasted material from the face to the primary crusher and running under the bins to receive various sized material from the secondary crusher. The A60H will also be deployed on developing new areas being opened up in the quarry which will involve large scale muck shifting to expose virgin rock for extraction – a task that cannot be viably undertaken by rigid haulers.

Since its initial delivery in November 2017 CEMEX UK has been monitoring the all- round performance of the A60H in terms of its productivity and fuel efficiency. Thus far the articulated hauler is exceeding all of the quarry’s expectations. “Opting for the A60H articulated hauler instead of another sixty tonne rigid truck has been a success here at Halkyn,” comments Quarry Manager Andrew Edwards. “The A60H is giving us tremendous flexibility in all the areas of our production whether it is hauling directly from the face, moving secondary material from the bins or working on our developing areas on wholesale muck shifting duties,” he continues.

With the aid of Care Track, Volvo CE’s telemetry system the performance of the A60H can be clearly tracked. In February this year for example the A60H carried a total of 27406 tonnes with a generous 6.9 tonnes of material moved per litre fuel burnt.

With an industry leading 55 tonne (60 ton) payload, the A60H brings a new dimension to reducing the cost per tonne of material moved using tried and tested frame and powertrain designs with the emphasis on fuel efficiency. The A60H is powered by a 16 litre Volvo engine, delivering 495 kW and 3200Nm of torque, and has a maximum speed of 54.9kph. It shares the same features and benefits in terms of design and overall layout as its smaller brothers in the Volvo articulated hauler range.

With the A60H, valuable data is on hand to improve onsite efficiency and save costs. With intelligent systems from Volvo, such as MATRIS™, CareTrack™ and the On Board Weighing system, customers can optimize production and minimize operational costs. Volvo uses the latest technology to monitor machine operation and status, advising on the best ways to increase profitability. The On Board Weighing System guarantees the optimal load every cycle. This maximizes production, boosts fuel efficiency and reduces machine wear in all site conditions and operations.

The ground breaking A60H features the latest innovations from Volvo. With matched drivetrain, automatic drive combinations, including 100% differential locks, all terrain bogie, hydro mechanical steering and active suspension, this machine is unbeatable. Fitted with an active hydraulic front suspension for higher hauling speeds in tough conditions, the A60H optimizes operator comfort and stability during travel, allowing more material to be moved in a shorter time for unmatched productivity. The A60H’s dump support system, Hill Assist and load and dump brake, all help the operator to stay in control at all times, for extra productivity and safety.