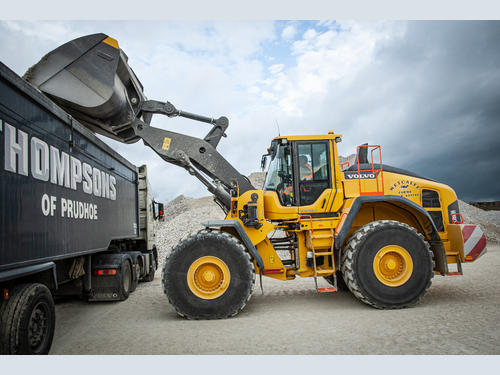 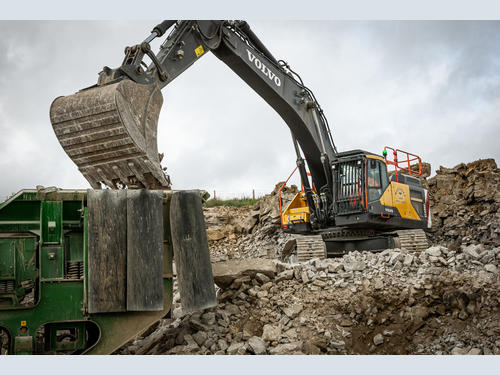 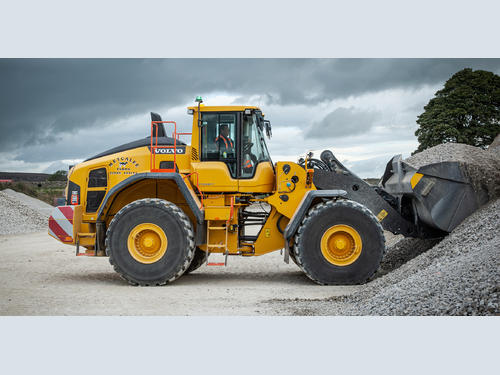 Metcalfe Farms Ltd, the heavy haulage and farming concern based at Leyburn, North Yorkshire, has purchased a Volvo L180H loading shovel and an EC480E excavator...

Taking charge of its mineral extraction activities at the Washfold facility, the two new Volvo machines replace two alternative makes to take charge of; primary extraction duties, rehandling and stocking out. The new Volvo machines will also be dispatching road wagons with limestone material in a whole range of finished sizes, including ag lime used for the agricultural market; and even the company’s own arable fields.

Whilst the material is regularly blasted, its very nature is well fragmented, thus, the EC480E is well suited to this application. “This is larger than the machine it replaces, but we can already see the benefits since it’s well on top of the job,” comments Metcalfe’s Quarry Manager, Neil. With its longer 7m boom, 3.35m dipper arm and 2.8m³ heavy-duty rock bucket, the EC480E is keeping the resident mobile crusher busy to the tune of up to 3,500 tonnes per day. Thus rigged, the EC480E is able to maintain a relatively static position due to its maximum reach of 12.1 metres, feeding the crusher and dressing the face that has been blasted. “The machine is performing very well in terms of its productivity, good fuel economy and extreme stability, even working at full reach,” comments Neil.

Another key consideration for selecting the Volvo L180H and EC480E was Metcalfe Farm’s desire to monitor and reduce their carbon footprint; both factors clearly elevate the Volvo machines above similar competitor offerings.

Complementing the prime extractive machine is a Volvo L180H, featuring a 13-litre stage V-engine, that develops 333hp in a relatively low rpm range of between 1,300 and 1,400 rpm. The machine also benefits from Volvo designed and manufactured driveline components, including optishift with torque converter lock up and reverse by braking feature – all designed to offer considerable fuel savings with each shift. Fuel savings are further enhanced by the Volvo Eco pedal, encouraging the operator to run the machine at its optimum rpm in the engine’s torque curve.

“We opted for the larger 28.5 tonne machine, complete with a 5.3m³ rehandling bucket and additional counterweight, in order to dispatch eight wheeled lorries in two passes, and articulated trailers in just three,” continues Neil. “The speed in truck turnaround times is making a significant improvement to our productivity. Not least, the fuels savings we are already making running the Volvo over its predecessor.” Moreover, the L180H has plenty of capacity for Metcalfe Farms’ needs, providing a generous load over height of 3.0 metres, a full turn tipping load of 20.7 tonnes, a break out force of 225kN and regular buckets weighing in the region of 11.5 tonnes. Besides the boom suspension system to aid load and carry work and automatic centralised greasing system, which come as standard, Metcalfe Farms has opted for Volvo’s CDC (Comfort Drive Control) system, enhancing fast turnaround and truck loading times whilst reducing operator fatigue.

Both the new arrivals are covered under an SMT GB Level 2 ENHANCE service agreement, whereby Volvo trained engineers will take care of the regular servicing of the machines at the correct intervals, using genuine Volvo parts and lubricants.