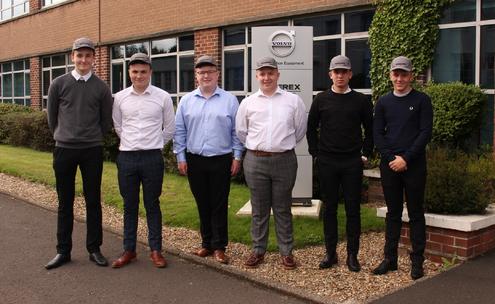 The new modern apprentices were selected via a multi-disciplinary test at the East Kilbride Group Training Association (EKGTA), which was followed by interviews, an assessment centre day then a final interview with the senior management team. The paid Modern Apprenticeship scheme provides hands-on experience and a range of qualifications including Scottish Vocational Qualifications (SVQs) and National Certificates (NCs), as well as the opportunity to progress to further education on completion.

Joining the workforce are Mark Rankin and Craig Shaw who carry out their apprenticeships in the Manufacturing Engineering department, Marc Walsh in the Technical Publications division, Reece Alexander in Maintenance Fitting, and Jack Murray who will specialise in Production Control.

The sixth recruit is Graduate Apprentice Electrical Design Engineer, Jamie Clarkson. He will complete a BEng (Hons) degree in Engineering: Design and Manufacturing as part of Volvo Motherwell’s first year of partnership with the University of Strathclyde on a graduate apprenticeship scheme.

Jamie explained: “Having the opportunity to learn and develop practical skills alongside studying for my degree is invaluable, and securing a role at a globally recognised company such as Volvo is a great step forward in my career aspirations. I’m looking forward to learning from the existing colleagues behind the heavy-duty machines that roll out of the Motherwell factory.

“I first found out about the company through a visit to the factory when I was at school so it’s exciting to now work here.”

As part of their induction programme, the team has test-driven the haulers, participated in a variety of team building activities and enjoyed a welcome lunch with VP Volvo Rigid Haulers & MD of Terex Trucks, Paul Douglas.

Paul Douglas said: “Our Modern Apprenticeship scheme is now in its sixth year and every year we have seen the number of applications grow; this year we had over 100 applications for the six roles and it’s the highest standard of candidates we’ve ever had. Through our unique programme we are committed to upskilling our new recruits and preparing them for a successful career in a variety of disciplines.

“We’re proud to welcome young, local and passionate people through the doors and it’s always a great feeling to see our apprentices succeed in practical applications as well academically. With both internal and external award ceremonies, as well as apprenticeship-led construction projects, we are continuously encouraging apprentices to take on new challenges and grow their skillsets.”

The new recruits have joined the six other apprentices currently undertaking their apprenticeships, which takes approximately four years to complete. During that time each apprentice will have a dedicated mentor and work alongside expert engineers, technicians and experienced team members. Part of the Modern Apprenticeship programme will also be completed at East Kilbride Group Training Association (EKGTA) while the graduate apprenticeship will be completed in part at the University of Strathclyde.