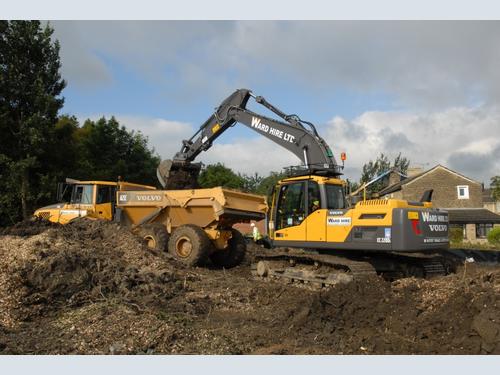 Since purchasing his first excavator last year, Brian Ward, Proprietor of Ward Dumptruck Hire Ltd has experienced such a high demand for his Volvo EC210C that he has added a further two machines to his fleet.

Since setting up in business seven years ago with his first Volvo articulated hauler Mr Ward has added a further six trucks to his growing hire fleet and last year took the decision to move into 360˚ excavators. "It was a bit of a gamble for me but since purchasing the twenty one tonne Volvo I haven't had to look back on it because the machine has been in constant demand," he says. "So much so it's given me the confidence to add a further two machines to the fleet." Having evaluated the market and considering the options Brian Ward opted for a further two Volvo excavators. "I could have opted for a cheaper brand, but the EC210C hasn't put a foot wrong since I've owned it and the end residual value will be a bonus when it becomes time to trade," he continued.

The latest two machines are Volvo EC220DL excavators and have already found favour with Brian Ward's experienced operators. "Besides the improvements to the cab and the digging performance we are pleased with the machines' fuel consumption. Working in ECO mode we are getting three days-worth of work out of the tank as opposed to two on the C model."

At the heart of the machine a 6 litre Stage IIIB engine developing 172 nett hp operates in conjunction with an advanced mode control system ensuring the maximum possible hydraulic horsepower available is delivered at a constant engine speed under varying load conditions.

Maximum reach with the intermediate dipper arm is a generous 9.9 whilst maximum digging depth is 6.73 metres and lifting capacity across carriage at full reach is and impressive 2.94 tonnes.

Operators can select the best work mode for the task at hand, ensuring optimum performance and fuel efficiency. Modes include: I-idle, F-fine, G-general, H-heavy or P-power, with the machine automatically setting the appropriate engine speed for the work mode and ECO mode is a new feature that works in G to H (or P) mode. Pump flow is controlled for combined digging and swinging operations to reduce the flow loss through the overload relief valves, while maintaining digging power and maximum swing torque. Eco mode provides better fuel efficiency without loss of performance in most operating conditions as already experienced by Brian Ward.

The new 'smart' hydraulics system is designed for high productivity, high digging capacity, easy maneuverability and class leading fuel economy. It features improvements that increase total flow and allow cycle times to improve by up to 2.5%. Independent and simultaneous movements of the digging equipment are controlled by an 'automatic sensing work mode'. It can also prioritize flow according to the work being done – e.g. to the boom for faster raising when loading or in deep excavations; to the arm during leveling or swing during large slewing angles. An Attachment Management system can store up to 18 pre-sets and enables hydraulic flow to be adjusted as per the requirements of the attachment in use.

Ward Dumptruck Hire Ltd is based in Selby, North Yorkshire and runs a total of seven Volvo articulated haulers and three Volvo excavators all with operators. The company prides itself in providing a reliable hire service to industry and is a preferred sub-contractor to Professional Remediation Ltd based in Leeds who specialise in remediation and preparatory earthworks and clearance of brownfield sites for development into housing and industrial estates.