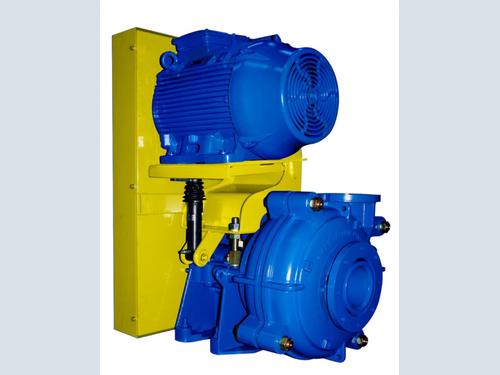 Weir Minerals has launched a new pumping solution incorporating the cutting edge Gemex® belt tensioner with the Warman® AH® pump - one of the most widely used slurry pumps in the world.

The system was developed after research into the power consumption and lifespan of slurry pumps revealed misaligned and poorly tensioned drive belts to be a major cause of poor energy efficiency and excess wear.

By integrating a hydraulically adjustable and mechanically lockable motor platform onto the pump’s bearing assembly, the system removes the need to re-align the motor each time the drive belt needs to be replaced, reducing the downtime required from hours to minutes.

Monty Riemann, Gemex® product manager at Weir Minerals, said: “The Warman AH is one of the most commonly used slurry pumps around the globe and years of refinement have made it among the most efficient and hard wearing pumps in its class. However, too often we have seen its performance compromised by poorly adjusted belt-drive systems.

“When properly tensioned and aligned, a belt system is one of the best ways to drive a pump, lowering the cost of ownership by allowing the optimal rotational speed to be selected and reducing vibration.

“However, the need to replace the belt periodically is a major drawback, requiring downtime and increasing the possibility of poor performance through incorrect alignment and tensioning.

“Weir Minerals’ new system addresses this one and only downside of belt drives – by speeding up belt replacement and removing the need to re-align the system each time a belt is replaced.

The Gemex® system was added to Weir Mineral’s product portfolio following Weir’s acquisition of Sweden-based Gema Industri AB, the developer of the system, at the beginning of 2012.