Why protect your investment? 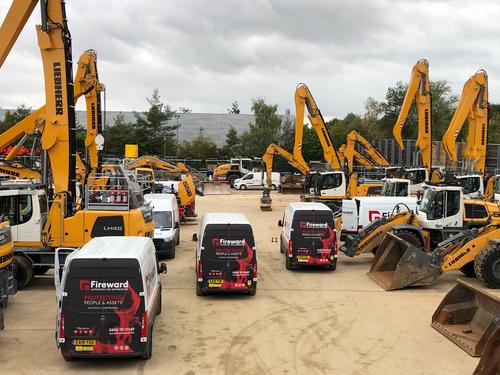 When it comes to keeping your investment safe and sound, how many owners think about protecting their equipment from fire?

It’s a commonplace feature on machines working in the waste handling sector, but away from that, it’s pretty rare. Yes, many machines are equipped with handheld fire extinguishers, but would you really want to tackle a blaze with one of them?

Fireward are the UK’s leading supplier of automatic fire suppression equipment and are dedicated to designing and installing only the best fire suppression systems, detecting fires immediately and extinguishing them before they can start to cause damage. Headquartered in Chelmsford, the company operates across the UK working closely with both OEMs and dealers alike offering a whole range of systems for every sector and application from on-road and off-road vehicles to protecting workshops and buildings too.

Sam Malins, CEO of Fireward explains, “Fire safety is extremely important. One of the key things around fire safety is that people don’t think it will happen to them, it’s often put to the bottom of the list of priorities”.

Damage caused by fire not only affects your vehicles, but it also impacts on the way you can effectively operate your business. Fireward tailor their fire suppression systems to meet a client’s particular requirements minimising the risk of a devastating fire and securing valuable assets at the same time. The company will look at an individual application in detail before advising on a particular suppression agent for the system. From water through to a variety of dry powder, gaseous and chemical agents, the team at Fireward will incorporate the ideal suppressant into a system to quickly and effectively kill the fire.

Offering companies peace of mind, Mark Scutt, Fireward Sales Director adds, “The beauty of our systems is that they are on all of the time and without any need for any power, it’s a 24/7 safe pair of hands for anybody that has a system fixed to an asset and some of these assets cost hundreds of thousands of pounds.”

Every system is tailormade to suit a particular application and that includes the method of suppressant delivery. Direct release systems work through installing a suppressant delivery tube throughout the engine and pump bays. Should a fire occur, the tube at the closest point to the outbreak will rupture, resulting in a pressure change in the system and releasing the suppressant to put the fire out.

This release occurs in under ten seconds and such is the quick response, the damage to vital components is limited. The company’s In-Direct system covers a larger area but is very similar in operating style. A trace tube detects the fire, ruptures and drops the system’s pressure. This then allows suppressant to be deployed from strategically located nozzles around the machine.

The Indirect system requires no electrical input so is ideal for machinery that may be parked up or suffers from an electrical fault causing the fire. The In-Direct dual agent system, as the name suggests, allows a combination of agents to be used such as powder and foam allowing the benefit of extinguishing the fire quickly and cooling the area at the same time to stop potential re-ignition.

For anyone operating in dusty environments or the petrochemical industries, spark detection systems are a must. Fireward offers a comprehensive system to detect and extinguish sparks before they can potentially cause catastrophe.

The Fireward systems usually consist of a pair of bright red canisters strapped to the machine. Resembling traditional fire extinguishers, the canisters are plumbed into the machine carefully so as not to interfere with the day to day running of a machine. The routing of the tubing also allows the operator to carry out daily checks as normal without any worry of damaging or disturbing the robust system.