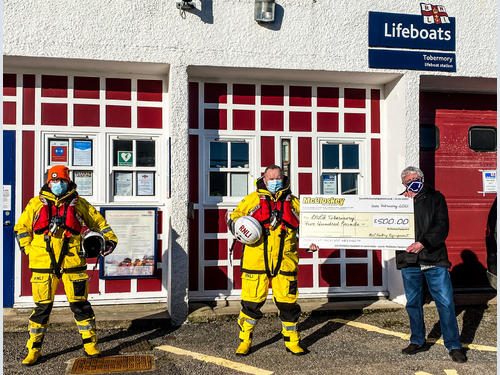 Charity cheque handed over to Tobermory Lifeboat station by the brothers’ father, Jim Wilkie, an Isle of Mull resident. 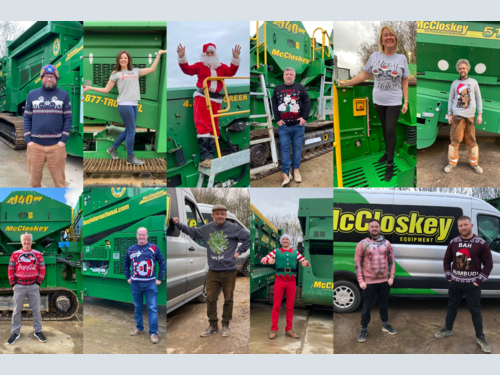 McCloskey Equipment has made a generous donation to the Royal National Lifeboat Institution (RNLI) following a competition on its Facebook page, with thousands of individuals casting hundreds of votes.

On Friday 11 December 2020 – internationally recognised as Christmas Jumper Day -
McCloskey Equipment held a competition on its Facebook page, where followers could vote for their favourite Christmas Jumper. Photographs of McCloskey Equipment employees wearing their personal jumpers were shared on the page for fans to Like, with every reaction adding to the total donation and entering the individual into a prize draw.

In total, the competition gained more than 10,000 Impressions and 497 Likes (votes) on the 13 images, which went right to the line to find an overall winner. Brothers Craig and Colin Wilkie both gained a strong start in the competition, which ran from 8am to 4pm. The two battled throughout the day, switching lead position more than 10 times, however it was Colin who ultimately won the competition, with a total of 86 Likes, with the winner allowed their choice of charity.

Today, McCloskey Equipment turned every Like into £1.00, donating a total of £500.00 to the RNLI. Fittingly, the cheque was handed over by the brothers’ father Jim, an Isle of Mull resident, to the RNLI in Tobermory. The donation will enable four members of the crew to be completely kitted out in proactive outwear, contribute to additional PPE expenditure, a considerable additional expense of the Covid pandemic, and support the upkeep of the station’s boat.

RNLI Tobermory Coxswain, David McHaffie, commented; “This is a very generous donation by McCloskey Equipment, we are very grateful for their efforts. Their donation will help provide essential kit keeping our volunteers as safe as possible whilst saving lives at sea.”

Tim Watson of McCloskey Equipment commented; “It’s the first time we’ve run a competition on our Facebook page and it was great to see so many people get in the Christmas spirit. Our customers know they can rely on the support from McCloskey Equipment and we wanted to extend this further, especially with the challenges faced throughout the pandemic.

“It really was a win-win scenario. Our followers got to see a more personal side of McCloskey Equipment, as well as the opportunity to win some exclusive merchandise. The RNLI benefited from a donation, which I’m sure will go a long way to keeping their crew safe.

“We wanted to spread some Christmas cheer with the team, our followers and the wider industry, whilst also giving something back to the community. Given the restrictions of Christmas 2020, we were delighted with the response and hope to hold more competitions on our social channels on Facebook, LinkedIn, Instagram, Twitter and YouTube in future.”