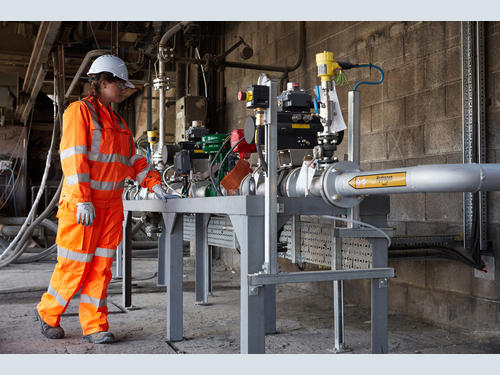 A UK cement kiln has successfully been operated using a net zero fuel as part of a world first demonstration using hydrogen technology.

Led by the Mineral Products Association (MPA), Hanson UK and made possible by Department for Business, Energy and Industrial Strategy (BEIS) funding, the trial used a mix of 100 per cent net zero fuels including hydrogen for commercial scale cement manufacture for the very first time.

During the demonstration at Hanson Cement’s Ribblesdale plant in Lancashire – a culmination of several years of work – the proportion of fuels in the cement kiln’s main burner was gradually increased to a wholly net zero mix*.

The mix consisted of tanker delivered hydrogen as well as meat and bone meal (MBM) and glycerine – by-products from the rendering and biodiesel industries respectively – demonstrating the pathway to moving away from using fossil fuels in cement and concrete production.

If fully implemented for the whole kiln system nearly 180,000 tonnes of carbon dioxide could be saved each year at Ribblesdale alone compared to using the traditional fuel of coal at the site.

“Our sector is committed to advancing ground-breaking collaborative research and innovation to meet the industry’s climate change objectives.  This world first trial has demonstrated the potential of using net zero fuel mixes for the manufacture of cement at commercial scale.

“Building on the significant steps our members have already taken through the use of waste derived fuels, in the future we envisage that combining the use of net zero fuels with Carbon Capture, Usage and Storage (CCUS) technology will enable the production of cement to capture more CO2 than it emits.”

Energy & Climate Change Minister Greg Hands said: “This project, supported by £3.2 million in government funding, is a key example of how we are supporting industry to reduce emissions and move away from relying on fossil fuels.

“Fuel switching and developing hydrogen technology will be vital for decarbonising industries such as cement production, and will help us further develop the green infrastructure needed as we drive forward the Prime Minister’s Ten Point Plan for a Green Industrial Revolution”.

Iain Walpole, Hanson UK’s environmental sustainability manager, who managed the project, said: “We are delighted to be involved with this world-leading project, which is a further example of our commitment to cutting CO2 emissions.

“The results of the trial are exciting and the prospect of using hydrogen in the fuel mix will help us – and others in the sector – on the road to net zero carbon. It will also contribute to our ambition of supplying net zero carbon concrete by 2050.”

The £3.2 million project has been funded by BEIS as part of its Industrial Fuel Switching Competition and is part of fuel switching trials managed by MPA at two sites.

A demonstration using plasma energy with biofuel in the kiln’s calciner will be taking place at a site in Derbyshire operated by Tarmac, alongside another trial exploring the use of hydrogen as an alternative to natural gas for lime manufacturing.

MPA will share results from all projects with cement producers and other energy-intensive industries both in the UK and globally as best practice examples, with the aim of spreading and maximising the environmental benefits of the technology.

The trial at Ribblesdale follows a BEIS-funded feasibility study in 2019 which demonstrated that a combination of biomass, hydrogen and plasma energy could be used to eliminate 100 per cent of fossil fuel CO2 emissions from cement manufacturing.

Fuel switching away from fossil fuels, including the potential to adopt hydrogen technology, represents one of seven key levers in MPA UK Concrete’s Roadmap to Beyond Net Zero. Published last year, the roadmap sets out the UK concrete and cement industry’s own commitments to achieving net zero, having already decarbonised by 53% since 1990.