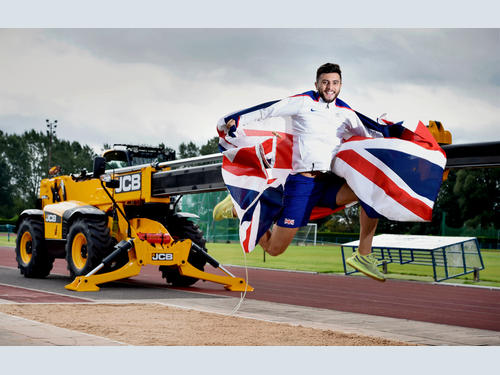 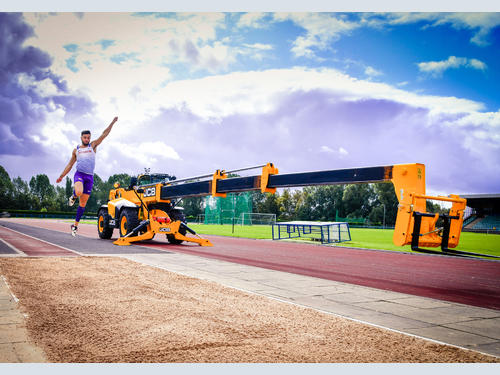 A British athlete who triple jumps further than the fully extended boom on one of JCB’s biggest Loadalls has an extra spring in his step today – after landing a sponsorship deal from digger maker JCB.

Ben Williams, 27, of Newcastle, Staffordshire, became British Triple Jump Champion last month with a life-time best jump of 17.27 metres – further than the reach of a fully extended boom on a 540-170 Lodall. The stunning achievement has earned him a place in the Great Britain team for the World Championships in Doha later this month.

Now he is celebrating again after Rocester-based JCB offered him sponsorship for the next year as he prepares for his ultimate goal – the summer games in 2020 in Tokyo. As well as providing some financial assistance, JCB will be offering Ben access to it medical and gym facilities for the year.

Ben said: “It has been a whirlwind few weeks and I’ve achieved more than anything I could have imagined. To top that off with sponsorship from JCB is just the icing on the cake. I’m born and bred in Staffordshire and it makes me feel so proud that a local company wants to support me in this way.”

JCB Chairman Lord Bamford said: “Our family company is looking ahead to a very special year in 2020 when we celebrate our 75th anniversary. We want that to be a cause of celebration for the whole of Staffordshire and supporting one of the county’s young athletes in the run up to next year’s summer games in Tokyo seems a perfect way to start. We wish Ben the best of luck later this month in Doha and in all future competitions.”

Ben, of Porthill, almost quit athletics in February after battling to come back from injury. With resources low, he started to personal train members at his local gym to make ends meet. In addition, he was completing 100-mile daily rounds trip to his triple jumping training sessions at Loughborough University in Leicestershire.  In August, he relocated permanently to Loughborough and gave up his PT job – and hasn’t looked back since.

Ben added: “Not having to drive every day and being in an environment with other athletes focussing totally on my training has been the best thing that could have happened. My form has improved massively and I’ve jumped further than any other British man since 2012 and there is plenty more left in the tank as I look ahead to competitions over the next year.”